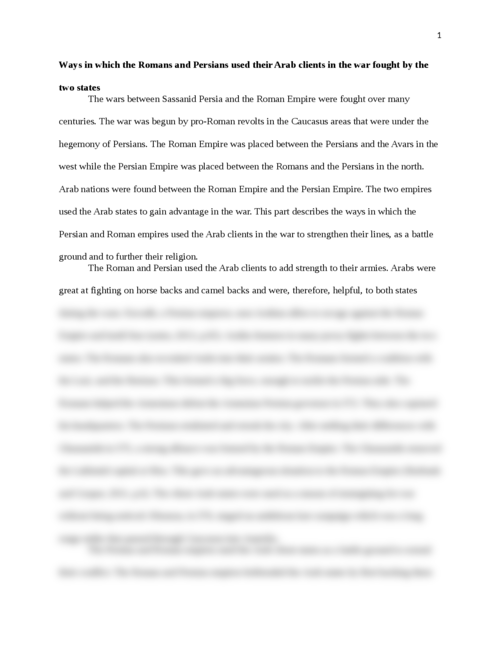 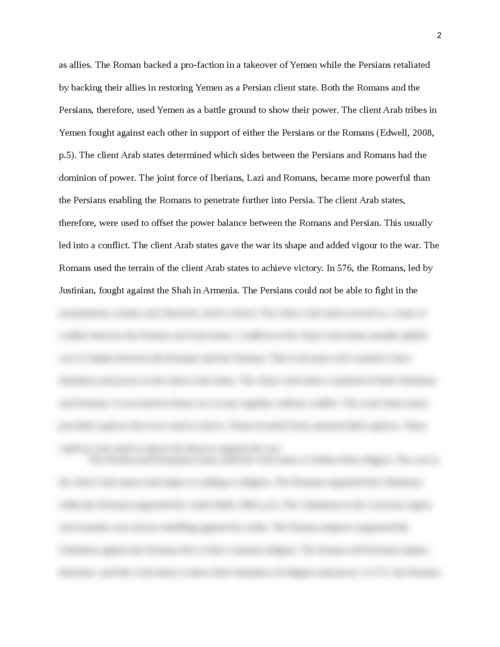 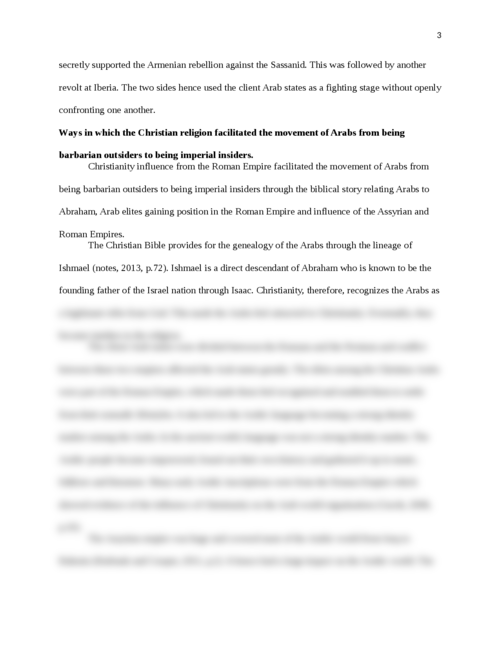 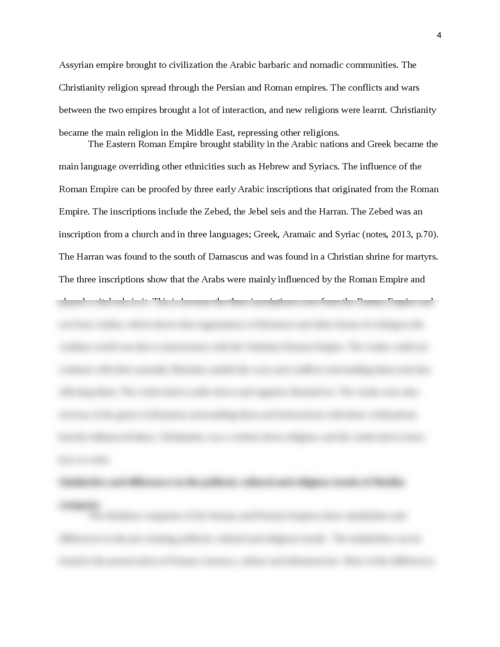 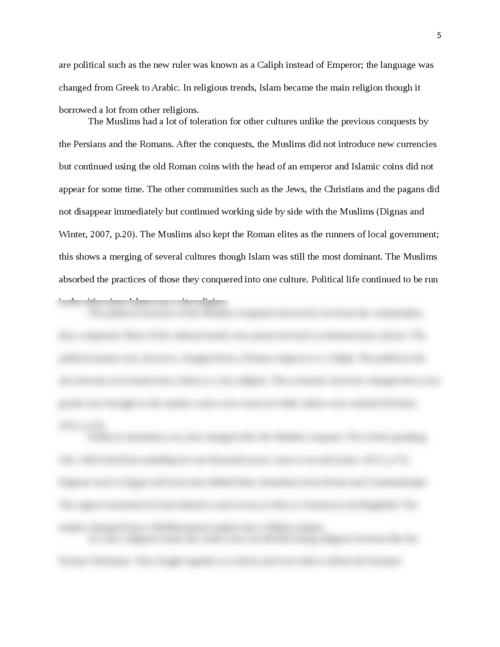 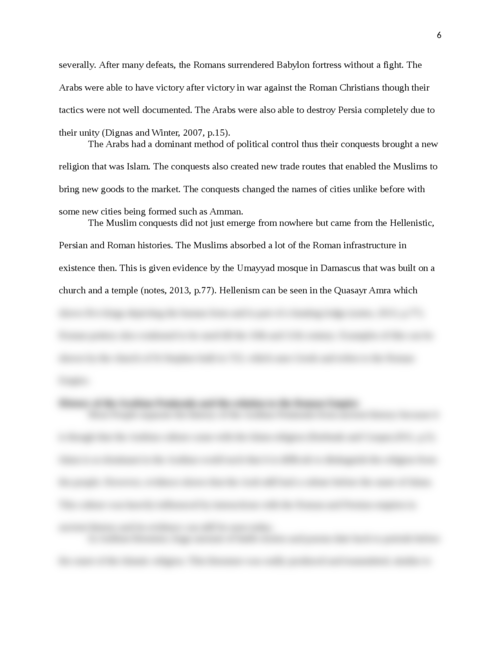 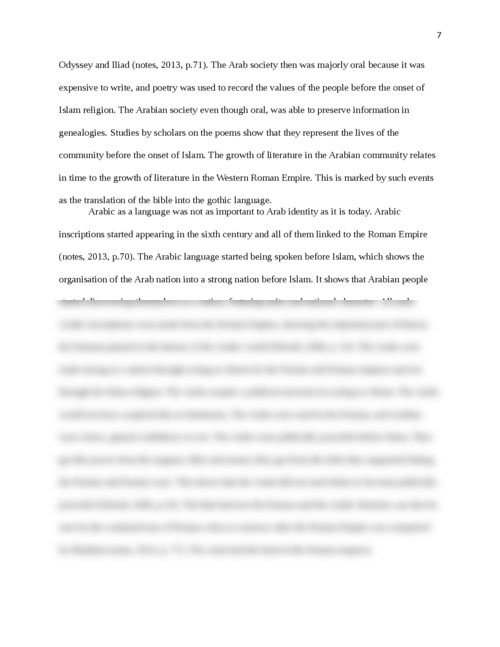 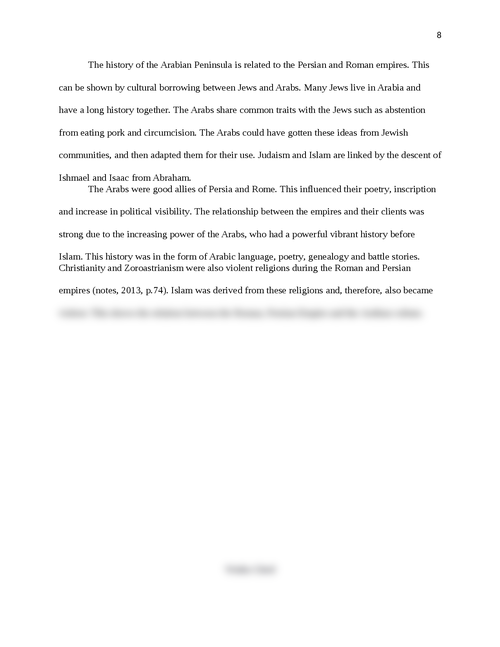 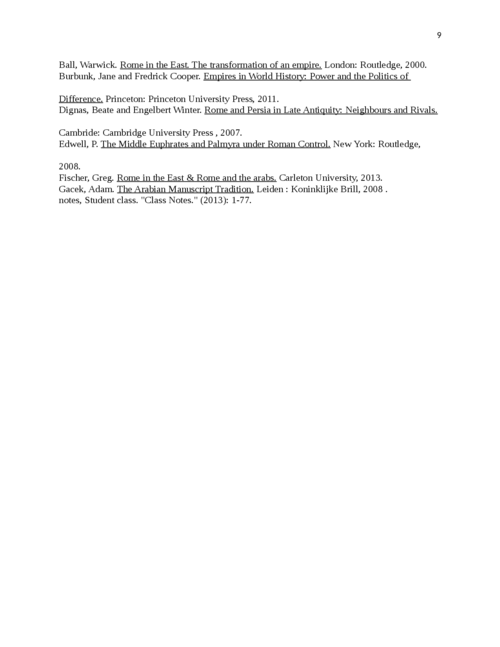 You must make use of class NOTES & TEXTS.

Append a reference list if you go beyond the class notes. Cite using parenthetical notation, e.g. (Fisher, p. 36) or (Class notes, Sept 23). Make sure to support your argument with evidence from class notes and the text(s) for the course.

2. P. Edwell, Between Rome and Persia. The Middle Euphrates and Palmyra under Roman Control (2008).

1. How did the Romans and Persians use their Arab clients in the war fought by the two states? Provide concrete examples from material covered in class. (2 pages)

2. Assess the way(s) in which the Christian religion facilitated the movement of Arabs from being ‘barbarian outsiders’ to being ‘imperial insiders.’ Provide concrete examples from material covered in class. (2 pages)

3. In what way(s) did the Muslim conquests represent an evolution of pre-existing political, cultural, and religious trends? In what way(s) were they different? Discuss two or three examples to illustrate your response, and be sure to justify your answer. Provide concrete examples from material covered in class. (2 pages)

4. For many years, the history of the Arabian peninsula in Late Antiquity (c. AD 200–800) was divorced from ancient history (i.e. the history of the Roman Empire) more generally. What reasons might explain this? Do you agree with the premise offered in this course that the history of Arabia needs to be seen from the broader perspective of Roman and Persian history? Provide concrete examples from material covered in class.

Title: Ways In Which The Romans And Persians Used Their Arab Clients In The War Fought By The Two States
Length: 10 pages (2705 Words)
Style: N/A

The Roman and Persian used the Arab clients to add strength to their armies. Arabs were great at fighting on horse backs and camel backs and were, therefore, helpful, to both states during the wars. Kavadh, a Persian emperor, uses Arabian allies to ravage against the Roman Empire and instil fear (notes, 2013, p.65). Arabia features in many proxy fights between the two states. The Romans also recruited Arabs into their armies. The Romans formed a coalition with the Lazi, and the Iberians. This formed a big force, enough to tackle the Persian side. The Romans helped the Armenians defeat the Armenian Persian governor in 572. They also captured his headquarters. The Persians retaliated and retook the city. After settling their differences with Ghassanids in 575, a strong alliance was formed by the Roman Empire. The Ghassanids removed the Lakhmid capital at Hira. This gave an advantageous situation to the Roman Empire (Burbunk and Cooper, 2011, p.6). The client Arab states were used as a means of strategising for war without being noticed. Khosrau, in 576, staged an ambitious last campaign which was a long range strike that passed through Caucasus into Anatolia.