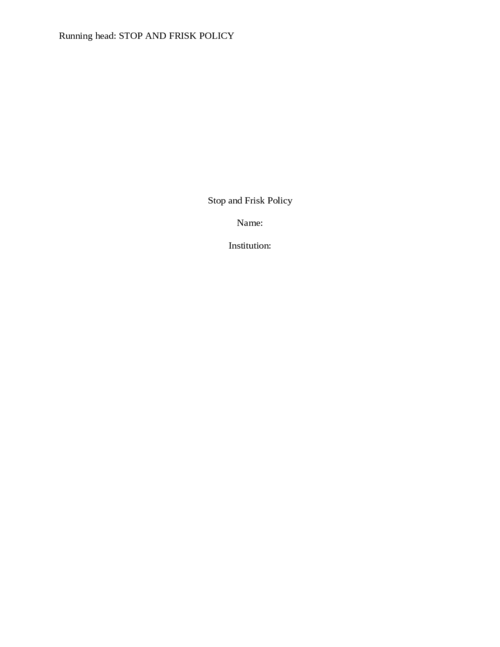 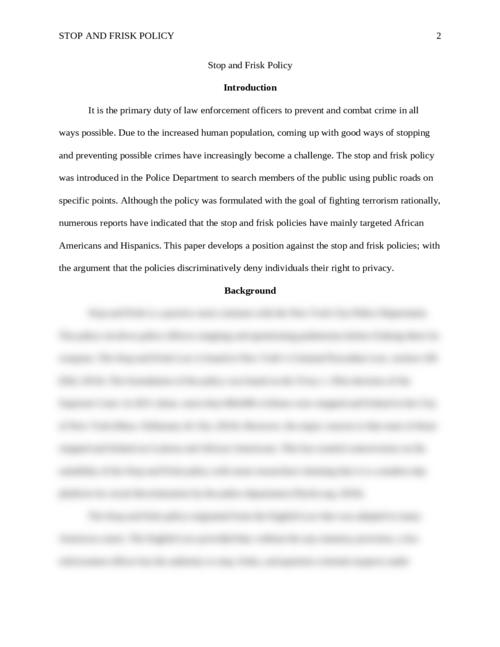 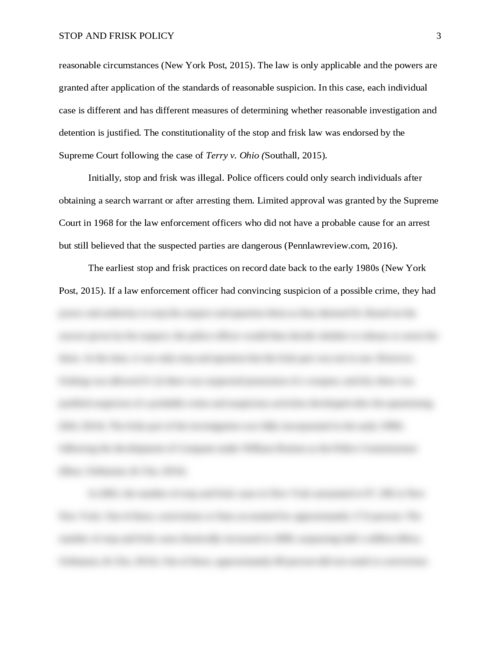 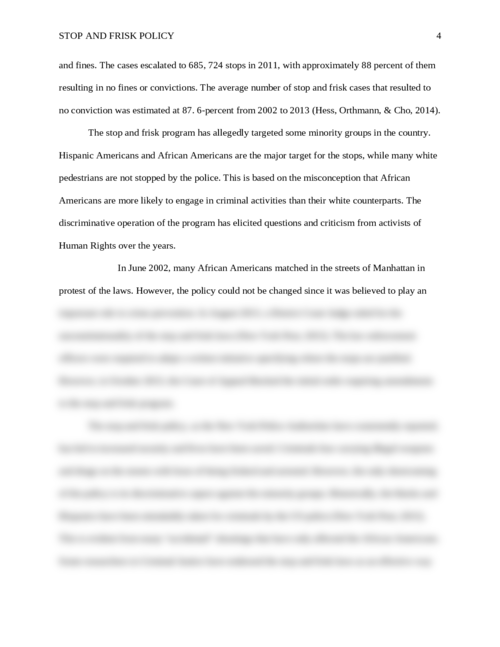 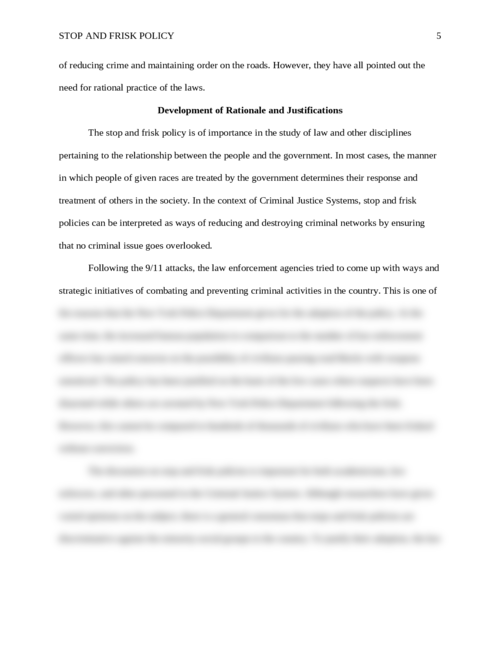 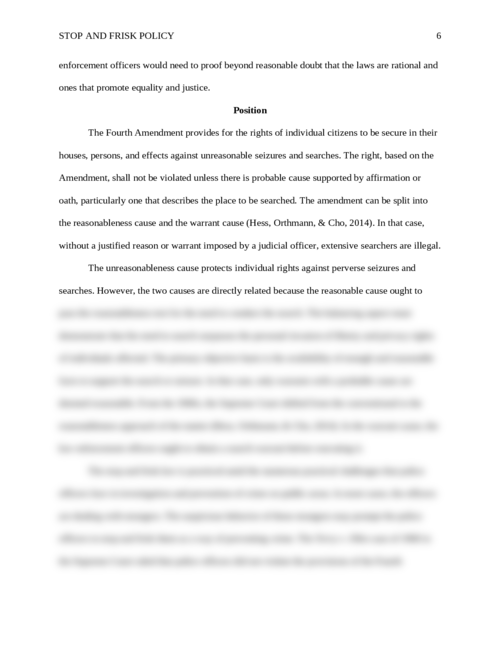 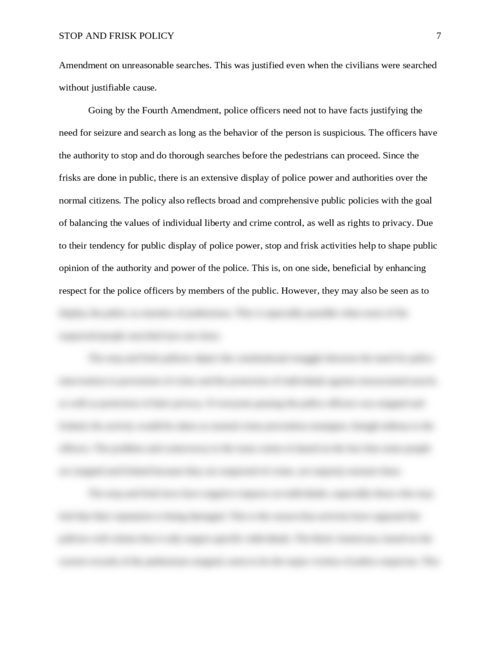 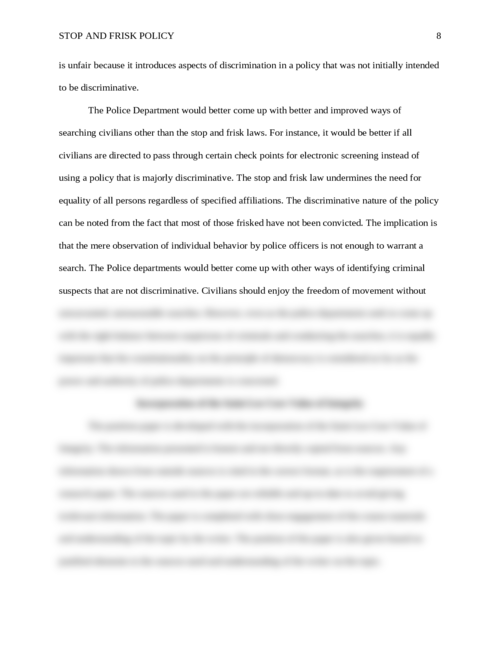 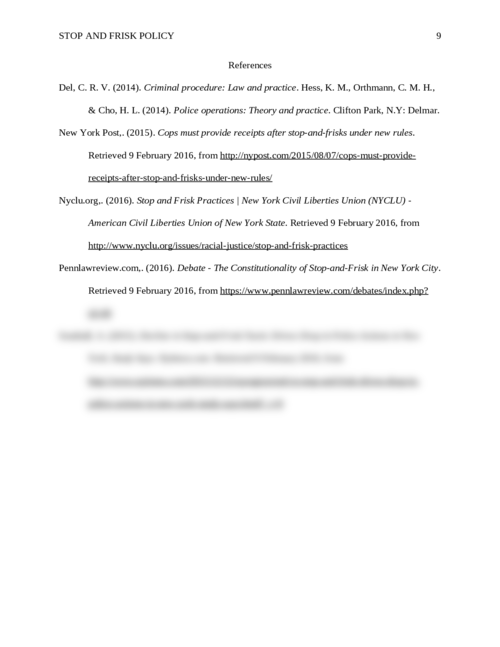 Each student is required to submit a research/position paper on a criminal justice topic. The paper must include background, development of rationale and justifications, the student’s position on the topic, and incorporation of the Saint Leo Core Value of Integrity. The paper must be prepared in a manner acceptable for university-level work (i.e. neatly typed, 12-point font, and double-spaced). All sources utilized to support the topic must be properly cited. The paper should be between 2100-3000 words (excluding endnotes and cover page) and adhere to APA format.

It is the primary duty of law enforcement officers to prevent and combat crime in all ways possible. Due to the increased human population, coming up with good ways of stopping and preventing possible crimes have increasingly become a challenge. The stop and frisk policy was introduced in the Police Department to search members of the public using public roads on specific points. Although the policy was formulated with the goal of fighting terrorism rationally, numerous reports have indicated that the stop and frisk policies have mainly targeted African Americans and Hispanics. This paper develops a position against the stop and frisk policies; with the argument that the policies discriminatively deny individuals their right to privacy.

Stop and Frisk is a practice most common with the New York City Police Department. The policy involves police officers stopping and questioning pedestrians before frisking them for weapons. The Stop and Frisk Law is found in New York’s Criminal Procedure Law, section 140 (Del, 2014). The formulation of the policy was based on the Treey v. Ohio decision of the Supreme Court. In 2011 alone, more than 684,000 civilians were stopped and frisked in the City of New York (Hess, Orthmann, & Cho, 2014). However, the major concern is that most of those stopped and frisked are Latinos and African Americans. This has created controversies on the suitability of the Stop and Frisk policy with some researchers claiming that it is a modern-day platform for racial discrimination by the police department (Nyclu.org, 2016).

The Stop and frisk policy originated from the English Law that was adopted in many American courts. The English Law provided that; without the any statutory provision, a law enforcement officer has the authority to stop, frisks, and question criminal suspects under reasonable circumstances (New York Post, 2015). 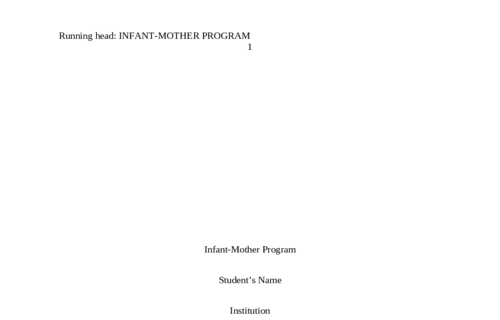 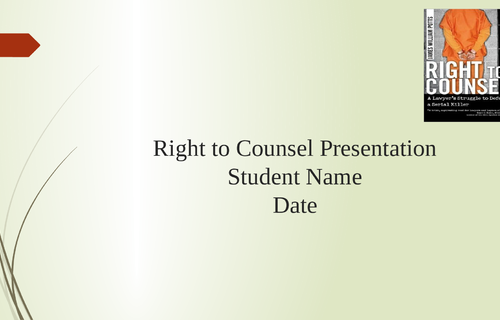