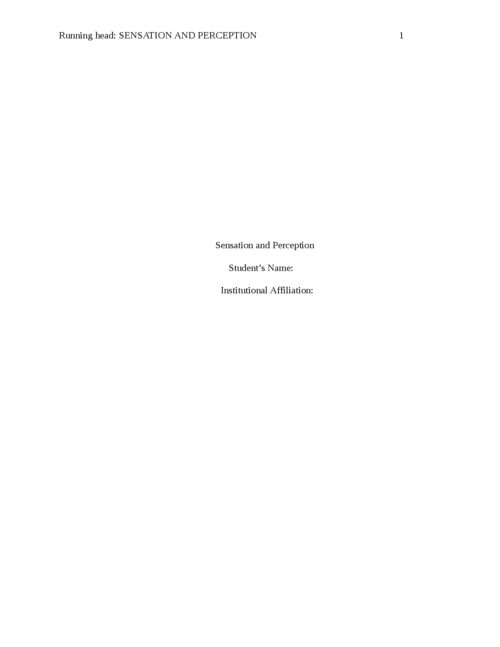 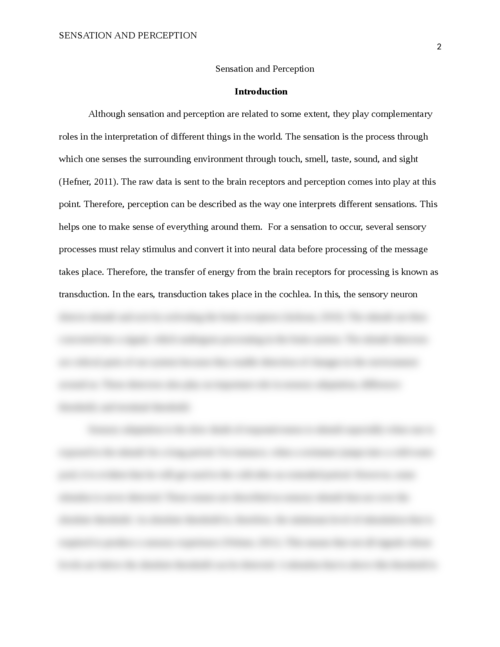 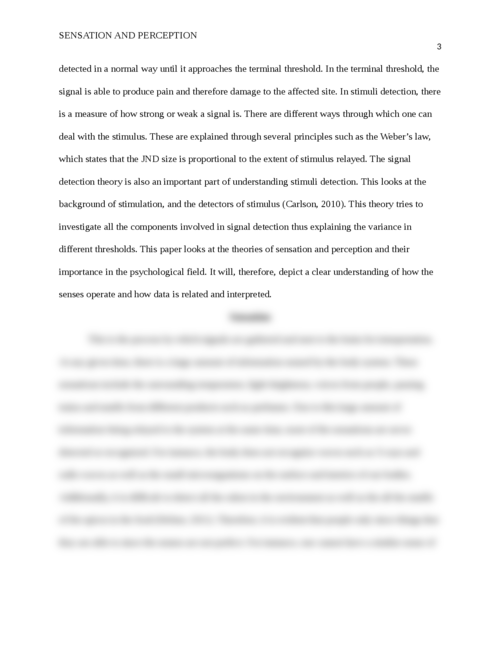 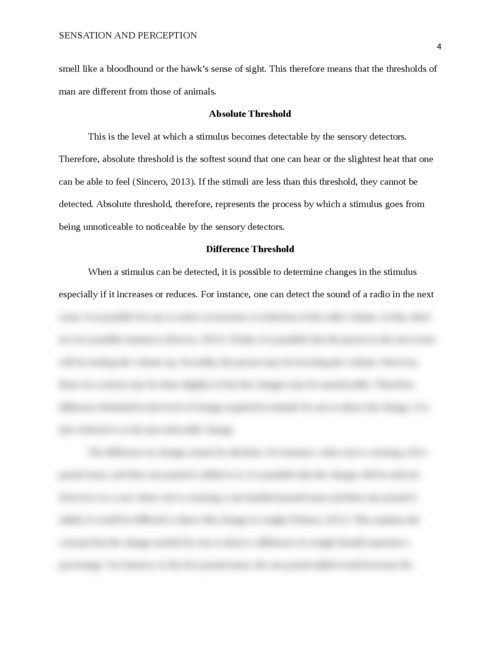 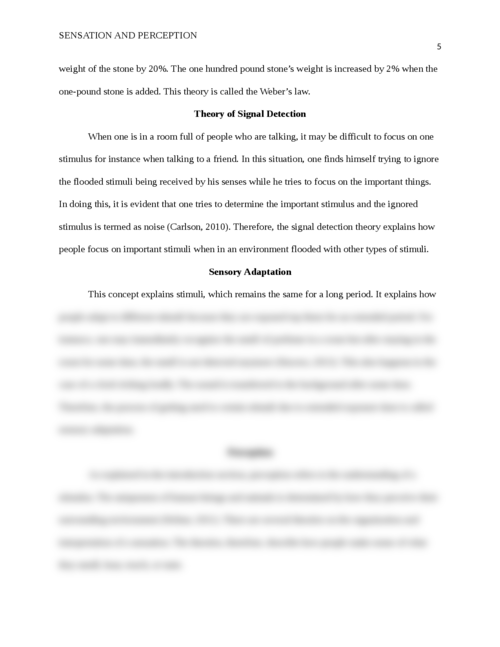 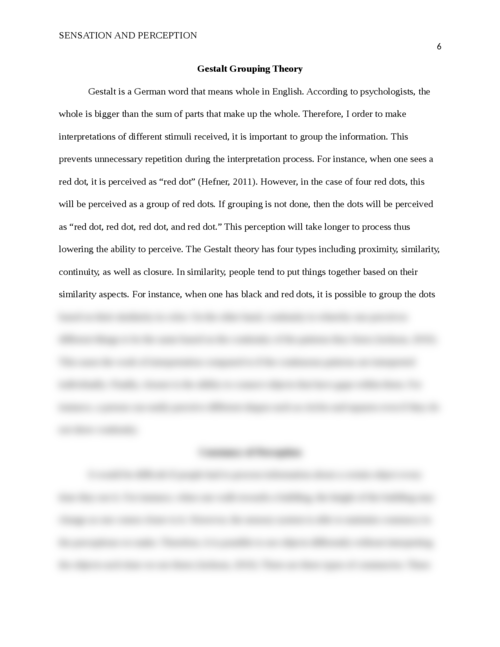 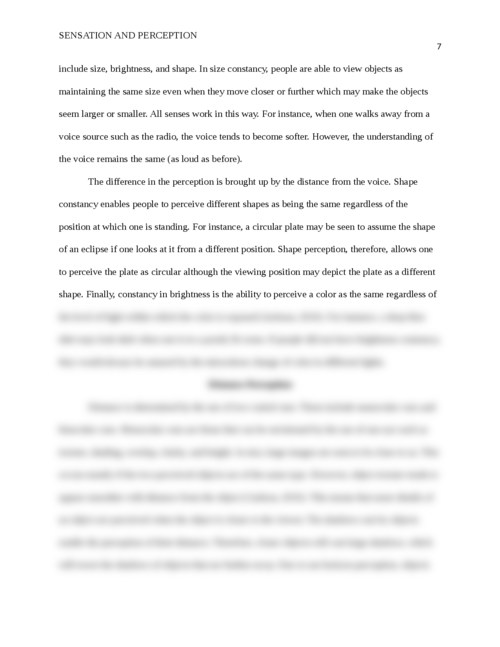 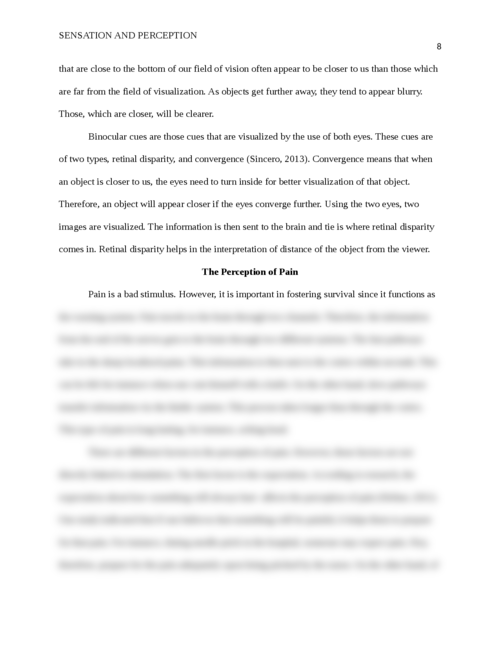 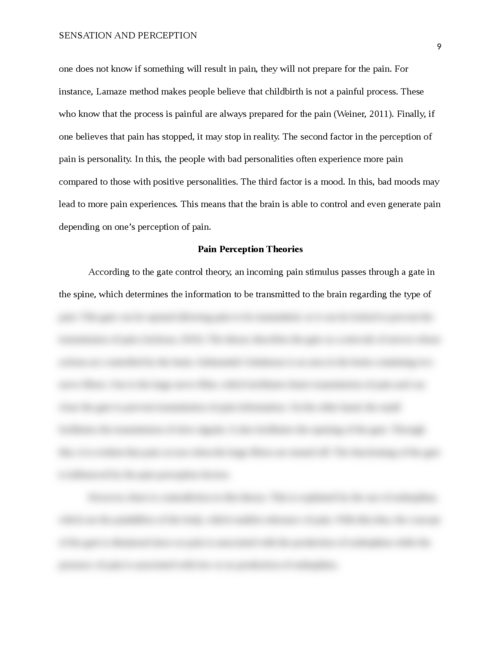 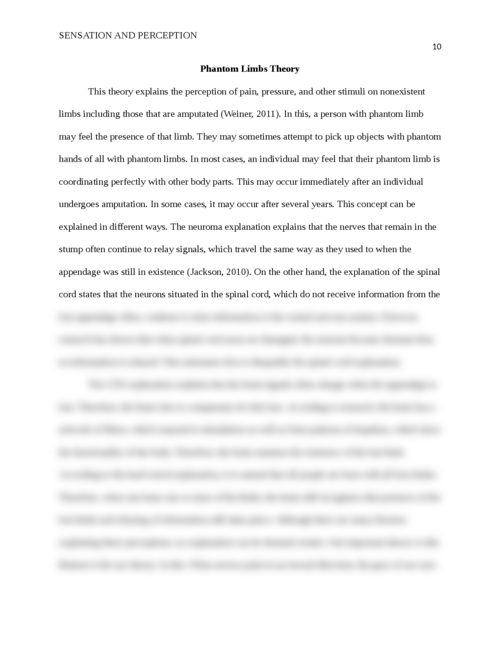 Analyze and evaluate recent research in sensation and perception will be based on at least five peer-reviewed references and will be submitted at the end of Week 8. You are not restricted to topics that appear in the textbook, but your project must be based on serious scholarship. Although it is permissible to choose the same topic as another class member, all work must be your own; this is not a collaborative project.

Although sensation and perception are related to some extent, they play complementary roles in the interpretation of different things in the world. The sensation is the process through which one senses the surrounding environment through touch, smell, taste, sound, and sight (Hefner, 2011). The raw data is sent to the brain receptors and perception comes into play at this point. Therefore, perception can be described as the way one interprets different sensations. This helps one to make sense of everything around them.  For a sensation to occur, several sensory processes must relay stimulus and convert it into neural data before processing of the message takes place. Therefore, the transfer of energy from the brain receptors for processing is known as transduction. In the ears, transduction takes place in the cochlea. In this, the sensory neuron detects stimuli and acts by activating the brain receptors (Jackson, 2010). The stimuli are then converted into a signal, which undergoes processing in the brain system. The stimuli detectors are critical parts of our system because they enable detection of changes in the environment around us. These detectors also play an important role in sensory adaptation, difference threshold, and terminal threshold.

Sensory adaptation is the slow death of responsiveness to stimuli especially when one is exposed to the stimuli for a long period. For instance, when a swimmer jumps into a cold-water pool, it is evident that he will get used to the cold after an extended period. However, some stimulus is never detected. These senses are described as sensory stimuli that are over the absolute threshold. An absolute threshold is, therefore, the minimum level of stimulation that is required to produce a sensory experience (Weiner, 2011). This means that not all signals whose levels are below the absolute threshold can be detected. A stimulus that is above this threshold is detected in a normal way until it approaches the terminal threshold. In the terminal threshold, the signal is able to produce pain and therefore damage to the affected site.