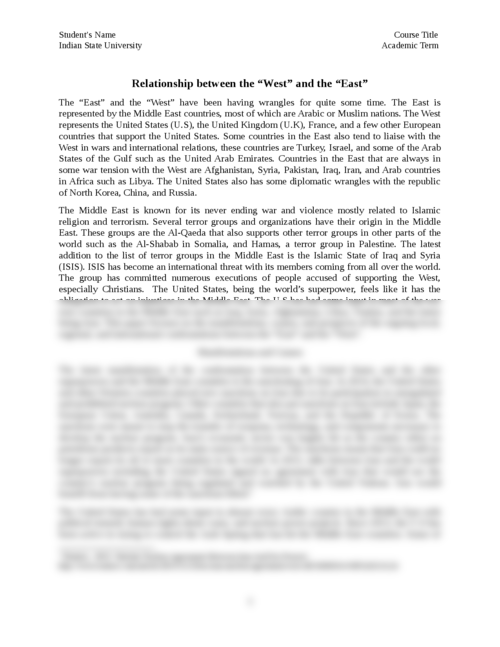 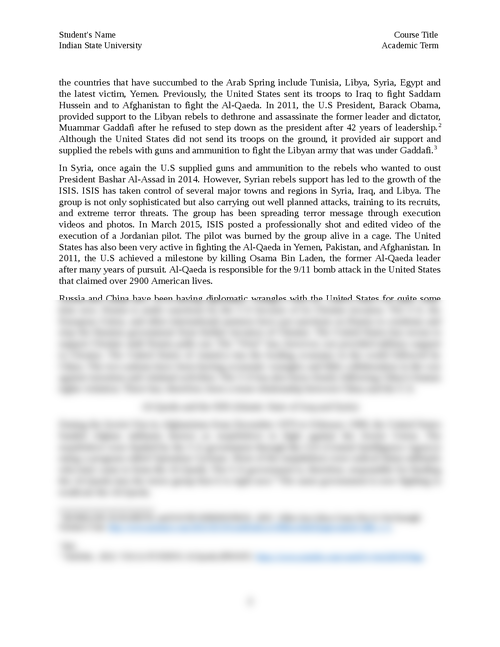 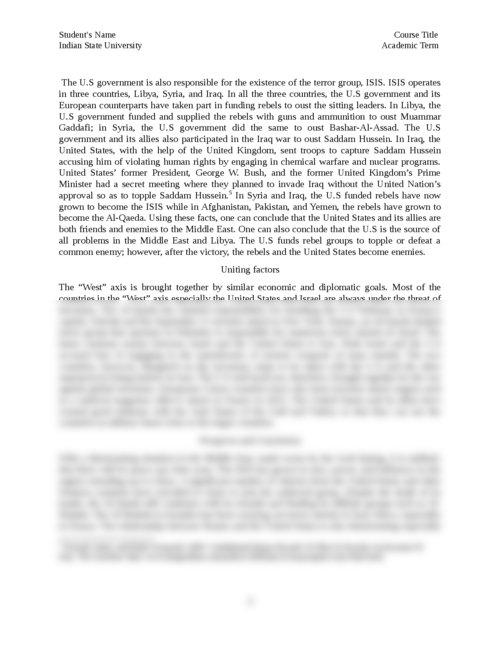 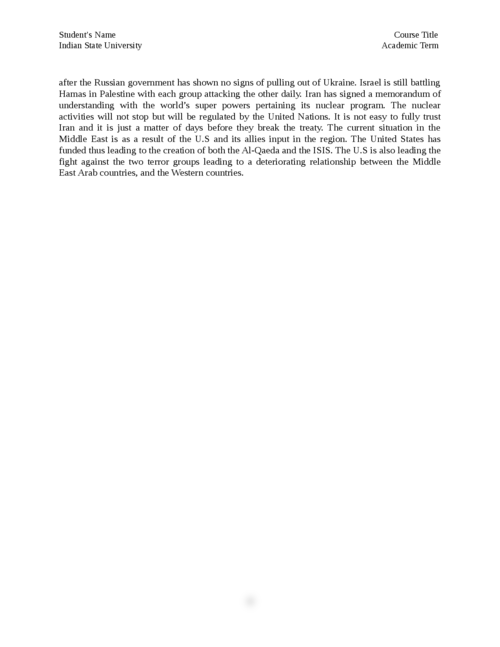 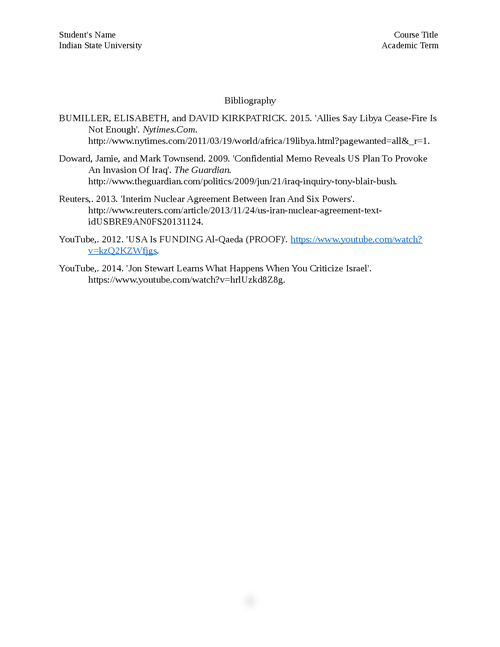 Relationship Between The "West" And The "East"

The Topic 5 is about Geographies of war, occupation, resistance, and terrorism. These are the Reading and the Videos. This is the Reading

AND This is the Videos

2- Jon Stewart Learns What Happens When You Criticize Israel

Title: Relationship Between The "West" And The "East"
Length: 6 pages (1650 Words)
Style: Turabian

Relationship between the “West” and the “East”

The “East” and the “West” have been having wrangles for quite some time. The East is represented by the Middle East countries, most of which are Arabic or Muslim nations. The West represents the United States (U.S), the United Kingdom (U.K), France, and a few other European countries that support the United States. Some countries in the East also tend to liaise with the West in wars and international relations, these countries are Turkey, Israel, and some of the Arab States of the Gulf such as the United Arab Emirates. Countries in the East that are always in some war tension with the West are Afghanistan, Syria, Pakistan, Iraq, Iran, and Arab countries in Africa such as Libya. The United States also has some diplomatic wrangles with the republic of North Korea, China, and Russia.

The Middle East is known for its never ending war and violence mostly related to Islamic religion and terrorism. Several terror groups and organizations have their origin in the Middle East. These groups are the Al-Qaeda that also supports other terror groups in other parts of the world such as the Al-Shabab in Somalia, and Hamas, a terror group in Palestine. The latest addition to the list of terror groups in the Middle East is the Islamic State of Iraq and Syria (ISIS). ISIS has become an international threat with its members coming from all over the world. The group has committed numerous executions of people accused of supporting the West, especially Christians.  The United States, being the world’s superpower, feels like it has the obligation to act on injustices in the Middle East. The U.S has had some input in most of the war torn countries in the Middle East such as Iraq, Syria, Afghanistan, Libya, Tunisia, and the latest being Iran. This paper focuses on the manifestations, causes, and prospects of the ongoing local, regional, and international confrontations between the “East” and the “West”.

The latest manifestation of the confrontation between the United States and the other superpowers and the Middle East countries is the sanctioning of Iran. In 2014, the United States and other Western countries placed new sanctions on Iran due to its participation in unregulated and prohibited nuclear program. Other countries that also put sanctions on Iran include Japan, the European Union, Australia, Canada, Switzerland, Norway, and the Republic of Korea. The sanctions were meant to stop the transfer of weapons, technology, and components necessary to develop the nuclear program. Iran’s economic sector was largely hit as the country relies on petroleum products export as its main source of revenue. The sanctions meant that Iran could no longer export its oil to most countries in the world. In 2013, talks between Iran and the world superpowers including the United States signed an agreement with Iran that would see the country’s nuclear program being regulated and watched by the United Nations. Iran would benefit from having some of the sanctions lifted.