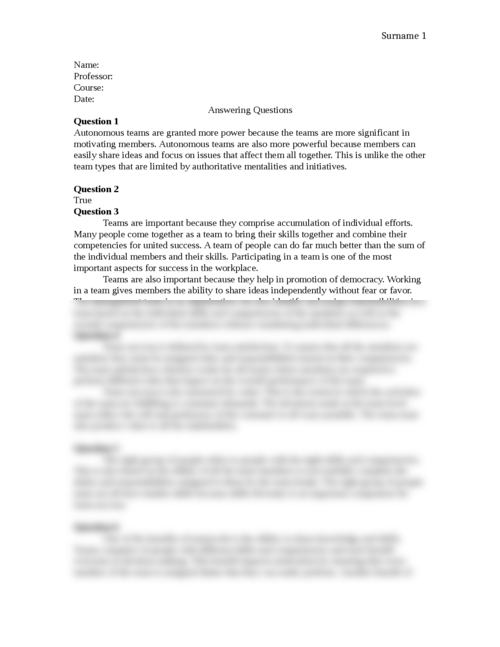 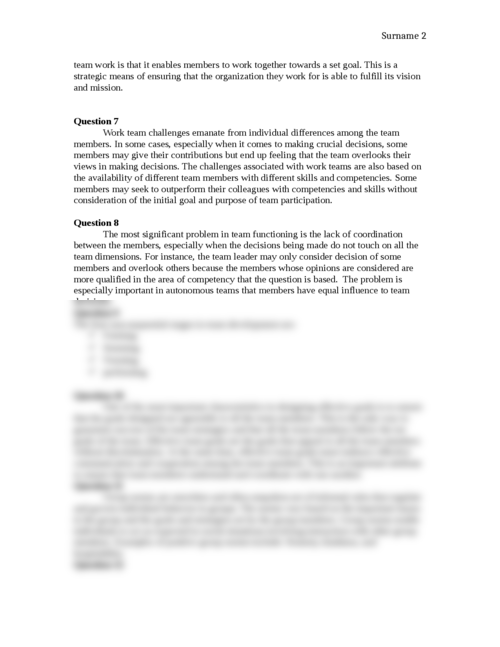 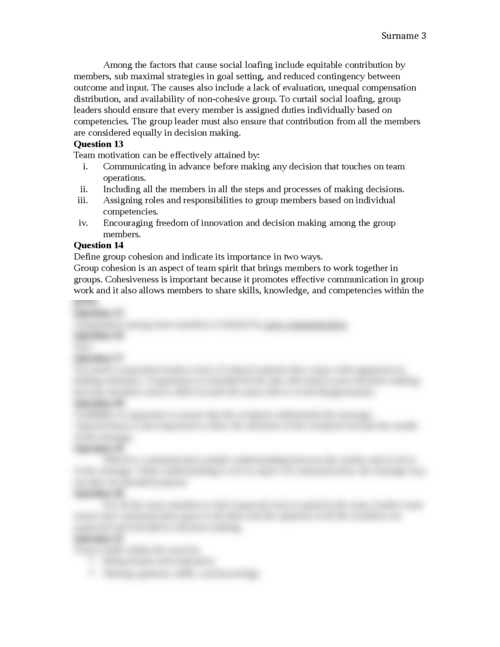 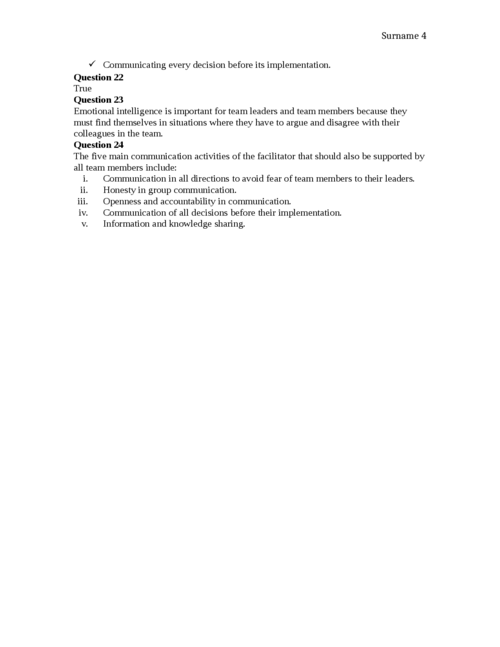 According to Levi (2014) family meets the definition of a team.True or False

Managers often evaluate team success. What criteria would they most likely use to determine or define team success? State at least two.

Levi (2014) mentions several benefits of teamwork. State two benefits and explain why you believe the two you selected would impact your motivation to serve on a team with enthusiasm and provide for you a sense of meaningful work.

Implementing workteams often creates challenges. Why is this so?

Based on your study of Levi (2014) and viewing/listening to the class lectures via Tegrity, what is the most significant problem relative to team functioning? Please explain your answer in 2-4 substantive sentences.

Group development may be related to the development of internal relations among team members based on specific non-sequential stages. Name those stages?

If you were designing “effective goals” for your team what characteristics would you include?

Rules of the Road, as identified in class by Dr. Graham, also means “Group Norms” as revealed by Levi (2014). Exactly what did Dr. Levi mean by these terms (Group Norms) and what are some positive group norms (name at least 3). This is a two part question valued at 10 points.

Explain what factors may cause social loafing? Offer at least two initiatives that a team leader might implement to curtail social loafing. This is two-part, 10 point item

Define group cohesion and indicate its importance in two ways.

According to Levi (2014), in the Japanese culture where high quality cars are built, competition is highly encouraged and rewarded to keep workers engaged and challenged. True or False

What happens when teams experience too much cooperation (conformity)? Offer at least three items in your response to this question.

Relative to team communication, the two primary characteristics of the sender are his/her

Please explain why these characteristics, according to Levi (2014) are important.

State, in a short sentence (less than 15 words) explain the basic requirement of effective communication (or messages).

How can leaders create a communication culture where all team members sense psychological safety (PS)?

State at least three of the five techniques that leaders and team members might use to build trust within a team.

Relative to building trust within teams, Levi (2014) suggested that trust is built on close friendships, acceptance of diversity, and a willingness to be somewhat skeptical of others. True or False

Why is it essential that team leaders and team members demonstrate emotional intelligence?

Relative to managing group processes in team meetings, state five main communication activities of the facilitator that should also be supported by all team members.

Teams are important because they comprise accumulation of individual efforts. Many people come together as a team to bring their skills together and combine their competencies for united success. A team of people can do far much better than the sum of the individual members and their skills. Participating in a team is one of the most important aspects for success in the workplace.

Teams are also important because they help in promotion of democracy. Working in a team gives members the ability to share ideas independently without fear or favor. The management team in an organization can also identify and assign responsibilities in a team based on the individual skills and competencies of the members as well as the overall competencies of the members without considering individual differences.