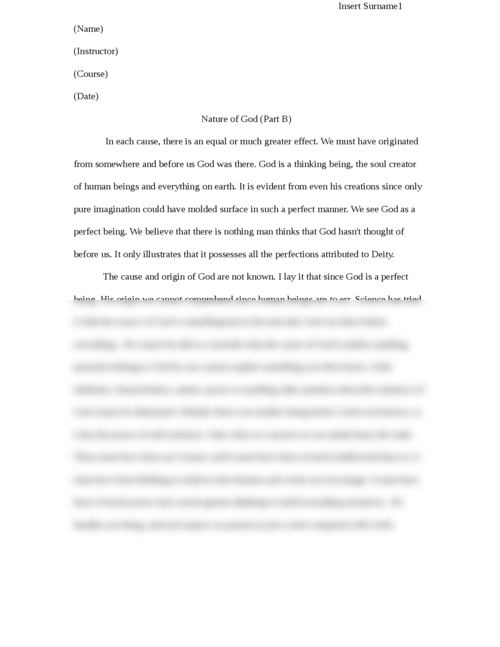 A. If we take the proper function of man to be a certain kind of life, and if this kind of life is an activity of the soul and consists in actions performed in conjunction with the rational element, and if a man of high standards is he who preforms these actions well and properly, and if a function is well performed when it is performed in accordance
with the excellence appropriate to it; we reach the conclusion that the good of man is an activity of the soul in conformity with excellence or virtue, and if there are several virtues, in conformity with the best
and most complete.

B. It is perfectly evident that there must at least be as much reality in the cause as in its effect; and accordingly, since I am a thinking thing and possess in myself an idea of God, whatever in the end be the cause of my existence, it must of necessity be admitted that it is likewise a thinking being, and that it possesses in itself the idea and all the perfections I attribute to Deity. Then it may again be inquired whether this cause owes its origin and existence to itself, or to some other cause. For if it be self-existent, it follows, from what I have before laid down, that this cause is God; for, since it possesses the perfection of self-existence, it must likewise, without doubt, have the power of actually possessing every perfection of which it has the idea--in other words, all the perfections I conceive to belong to God. But if it owe its existence to another cause than itself, we demand again, for a similar reason, whether this second cause exists of itself or through some other, until, from stage to stage, we at length arrive at an ultimate cause, which will be God.

Nature of God (Part B)

In each cause, there is an equal or much greater effect. We must have originated from somewhere and before us God was there. God is a thinking being, the soul creator of human beings and everything on earth. It is evident from even his creations since only pure imagination could have molded surface in such a perfect manner. We see God as a perfect being. We believe that there is nothing man thinks that God hasn't thought of before us. It only illustrates that it possesses all the perfections attributed to Deity.