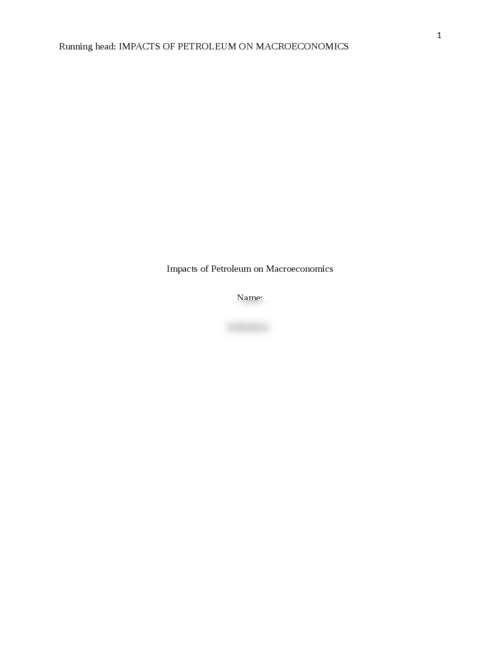 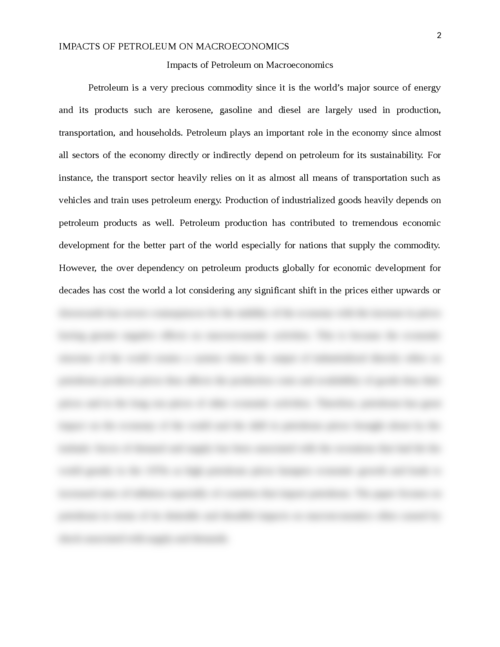 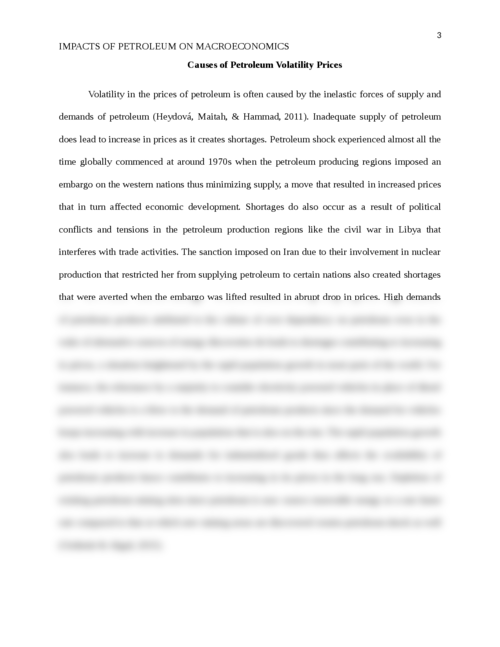 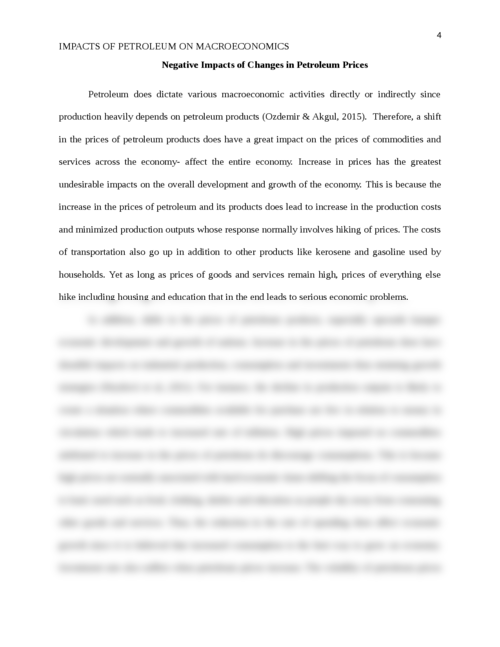 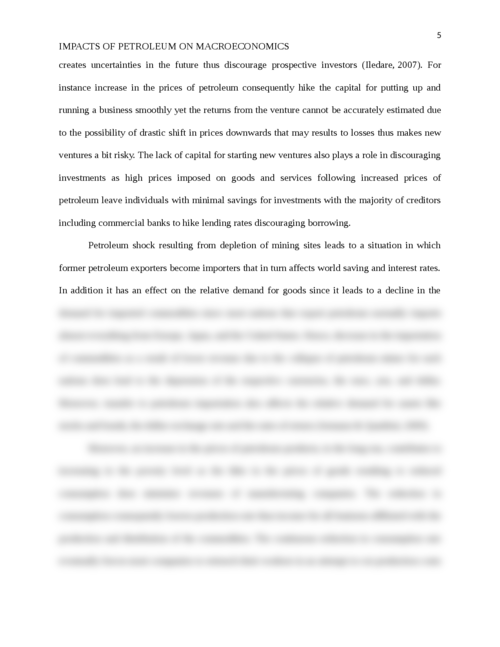 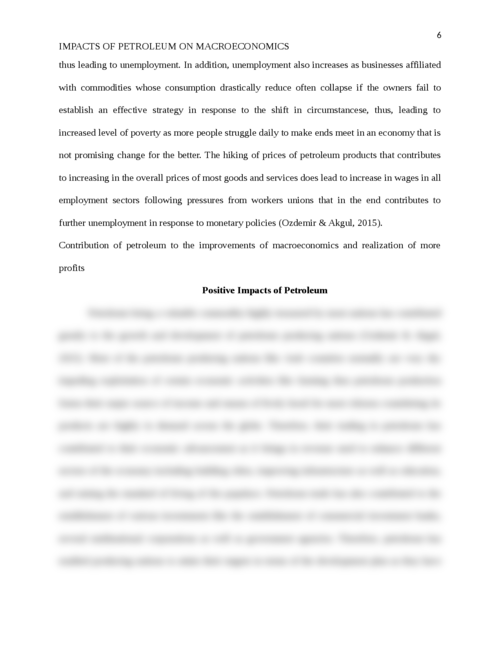 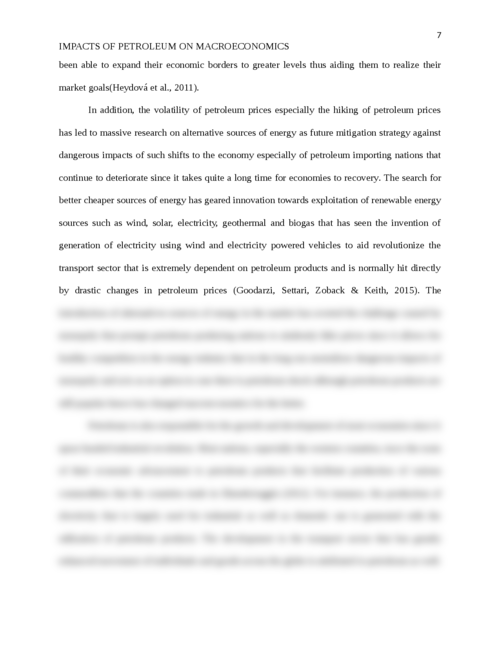 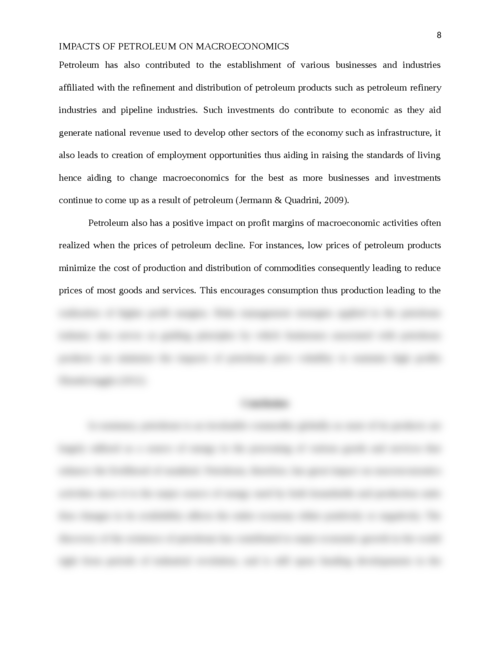 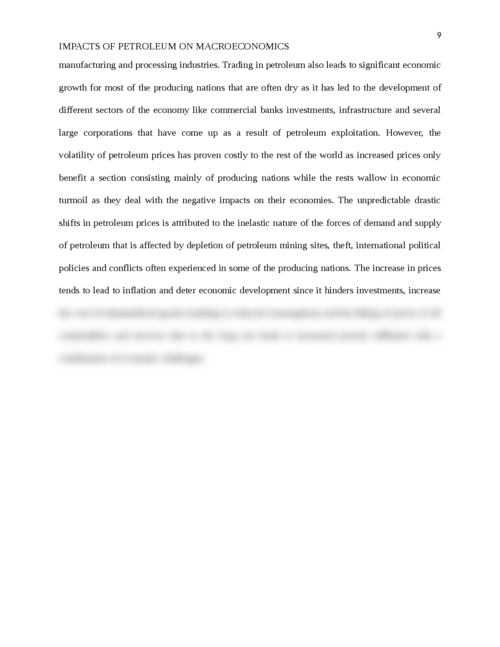 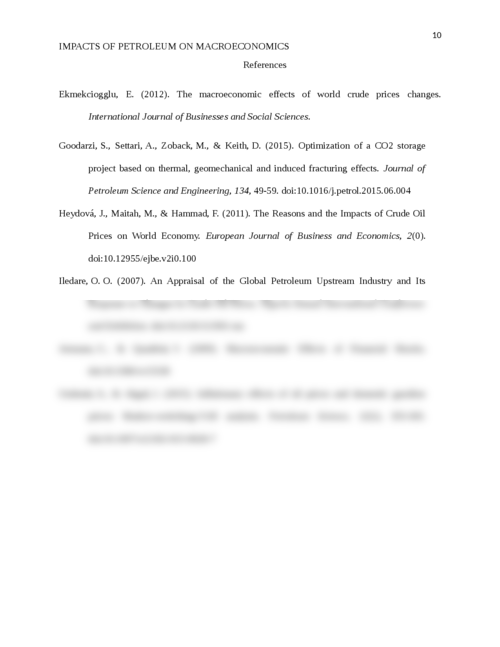 Impacts Of Petroleum On Macroeconomics

Option 1. A written paper of at least 8 pages

I want you to answer these questions

If you select option 1, the total length of the research project is eight pages of actual text and analysis, not including title or references pages. The project must have a title page and a references page and generally follow APA format. The idea with using the APA format is to make the paper look "university quality." The project is to be in 12 point, double-spaced Times New Roman font.

It is not necessary to use footnotes or endnotes; simply provide a citation in parentheses. Your project must have at least 6 sources not to include the textbook or an encyclopedia (including websites such as Wikipedia or Investopedia); at least 1 source must be peer reviewed.  Online resources are acceptable as long as they are scholarly in nature. The grade for option 1 will be based on the written project submitted.

Petroleum is a very precious commodity since it is the world’s major source of energy and its products such are kerosene, gasoline and diesel are largely used in production, transportation, and households. Petroleum plays an important role in the economy since almost all sectors of the economy directly or indirectly depend on petroleum for its sustainability. For instance, the transport sector heavily relies on it as almost all means of transportation such as vehicles and train uses petroleum energy. Production of industrialized goods heavily depends on petroleum products as well. Petroleum production has contributed to tremendous economic development for the better part of the world especially for nations that supply the commodity. However, the over dependency on petroleum products globally for economic development for decades has cost the world a lot considering any significant shift in the prices either upwards or downwards has severe consequences for the stability of the economy with the increase in prices having greater negative effects on macroeconomic activities. This is because the economic structure of the world creates a system where the output of industrialized directly relies on petroleum products prices thus affects the production costs and availability of goods thus their prices and in the long run prices of other economic activities. Therefore, petroleum has great impact on the economy of the world and the shift in petroleum prices brought about by the inelastic forces of demand and supply has been associated with the recessions that had hit the world greatly in the 1970s as high petroleum prices hampers economic growth and leads to increased rates of inflation especially of countries that import petroleum. The paper focuses on petroleum in terms of its desirable and dreadful impacts on macroeconomics often caused by shock associated with supply and demands.