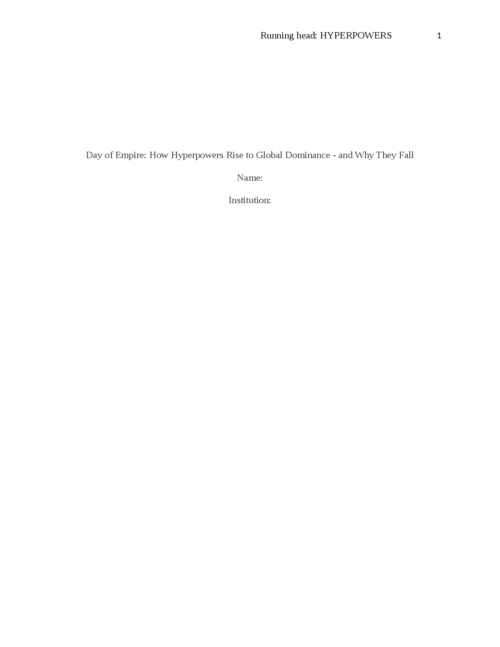 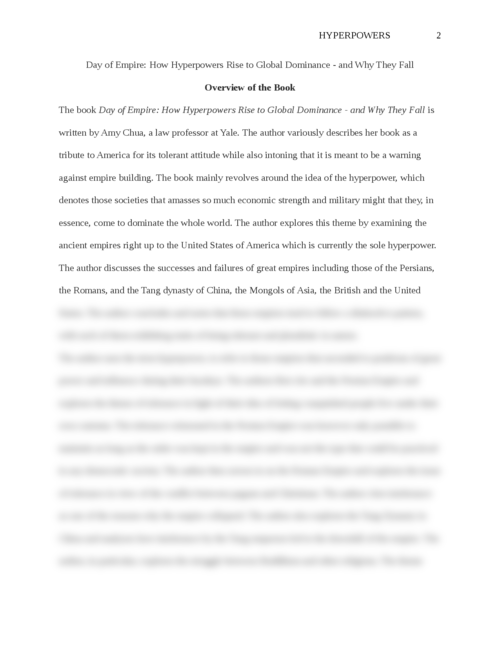 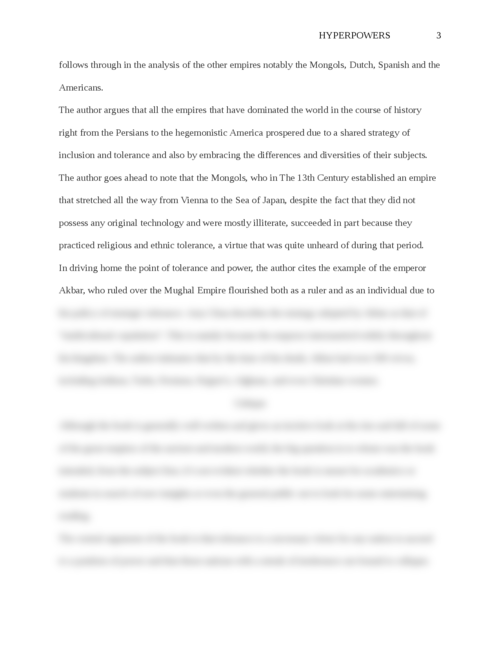 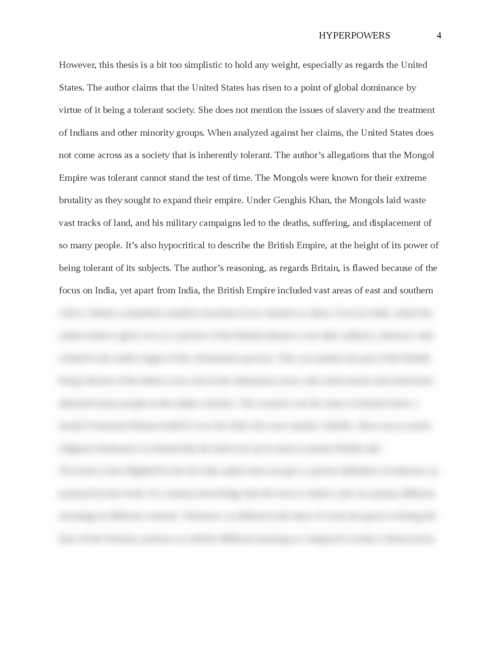 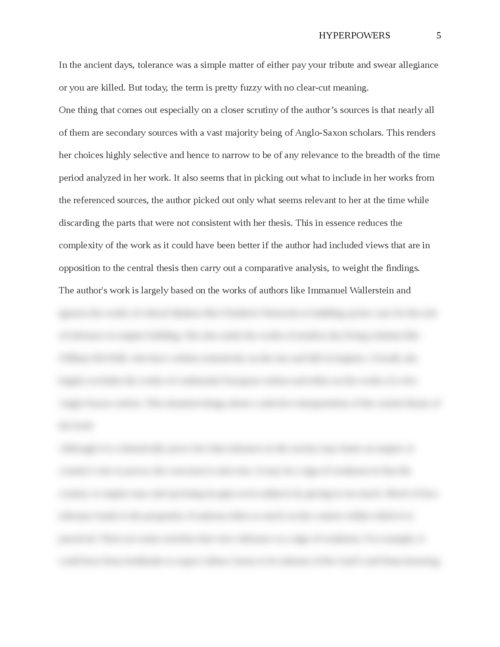 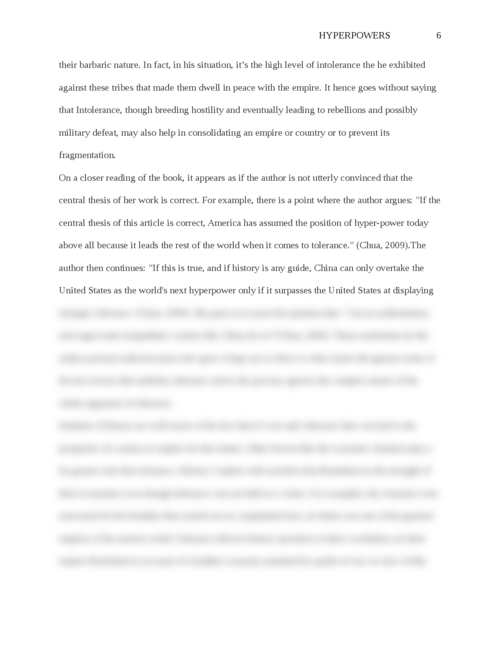 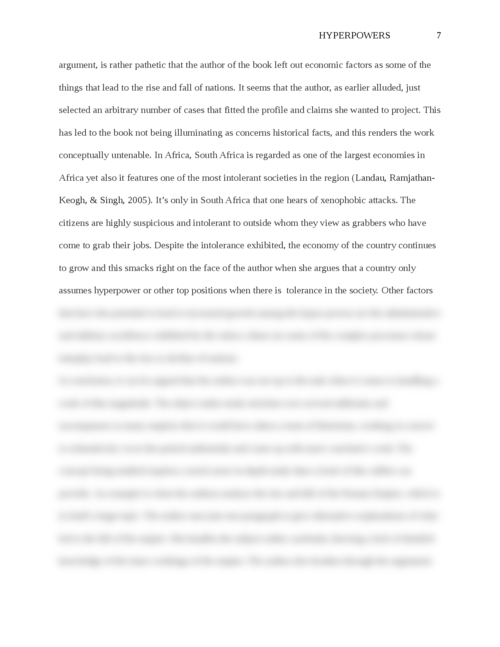 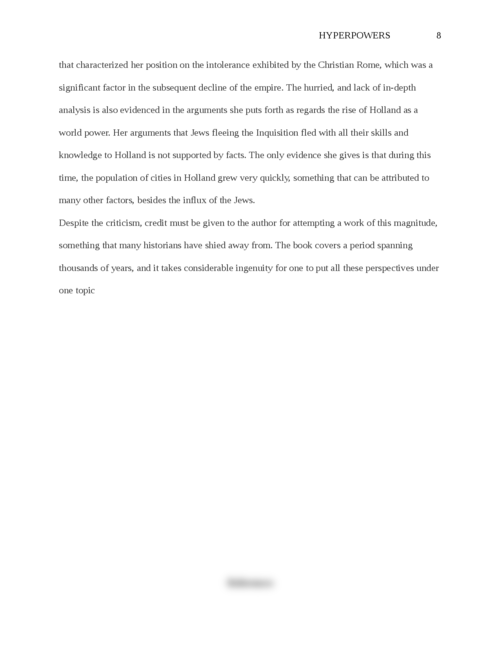 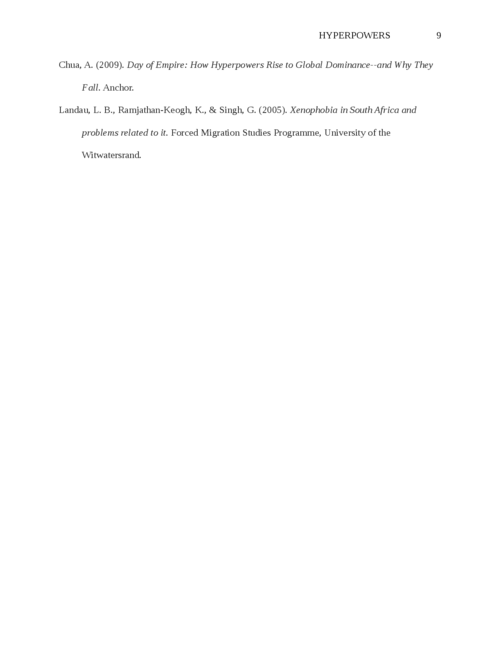 How Hyperpowers Rise To Global Dominance And Why They Fall

Book review: How Hyper powers Rise to Global Dominance - and Why They Fall by amy chua

Title: How Hyperpowers Rise To Global Dominance And Why They Fall
Length: 8 pages (2200 Words)
Style: APA

Day of Empire: How Hyperpowers Rise to Global Dominance - and Why They Fall

Overview of the Book

The book Day of Empire: How Hyperpowers Rise to Global Dominance - and Why They Fall is written by Amy Chua, a law professor at Yale. The author variously describes her book as a tribute to America for its tolerant attitude while also intoning that it is meant to be a warning against empire building. The book mainly revolves around the idea of the hyperpower, which denotes those societies that amasses so much economic strength and military might that they, in essence, come to dominate the whole world. The author explores this theme by examining the ancient empires right up to the United States of America which is currently the sole hyperpower. The author discusses the successes and failures of great empires including those of the Persians, the Romans, and the Tang dynasty of China, the Mongols of Asia, the British and the United States. The author concludes and notes that these empires tend to follow a distinctive pattern, with each of them exhibiting traits of being tolerant and pluralistic in nature.

The author uses the term hyperpower, to refer to those empires that ascended to positions of great power and influence during their heydays. The authors first cite and the Persian Empire and explores the theme of tolerance in light of their idea of letting vanquished people live under their own customs. The tolerance witnessed in the Persian Empire was however only possible to maintain as long as the order was kept in the empire and was not the type that could be practiced in any democratic society. The author then zeroes in on the Roman Empire and explores the issue of tolerance in view of the conflict between pagans and Christians. The author cites intolerance as one of the reasons why the empire collapsed. The author also explores the Tang Dynasty in China and analyzes how intolerance by the Tang emperors led to the downfall of the empire. The author, in particular, explores the struggle between Buddhism and other religions.