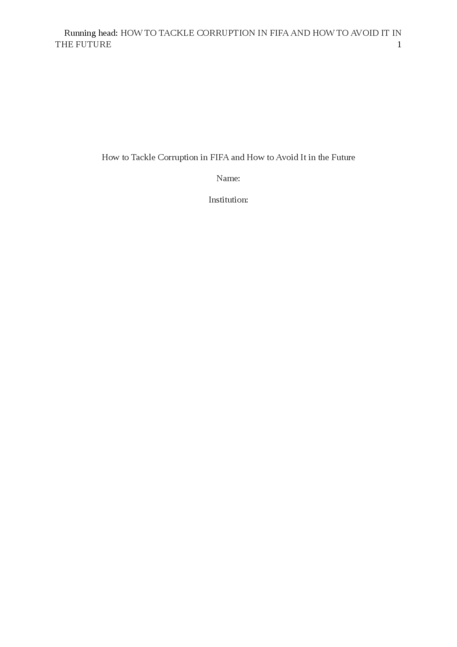 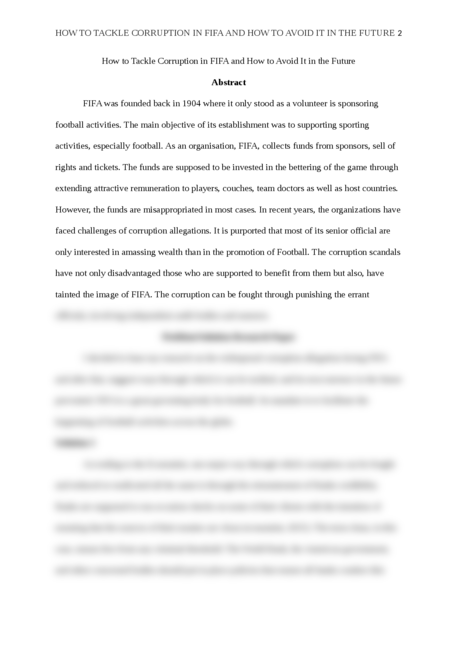 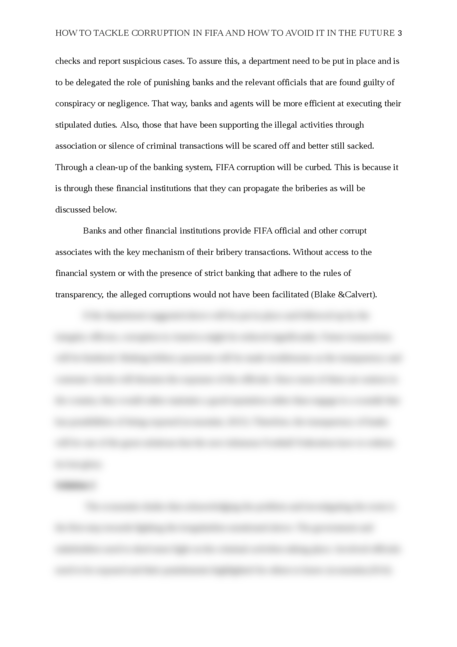 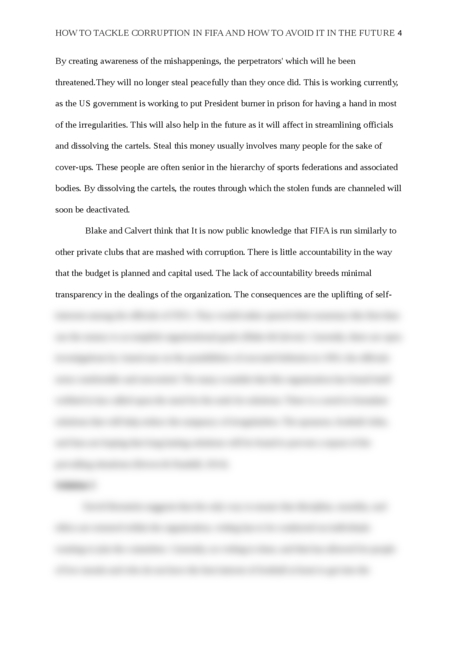 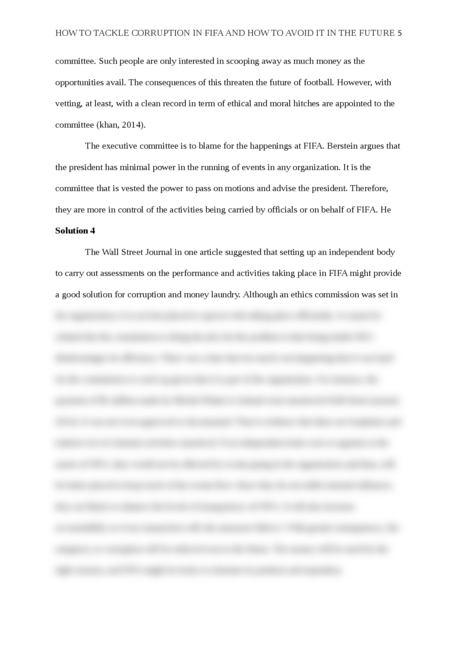 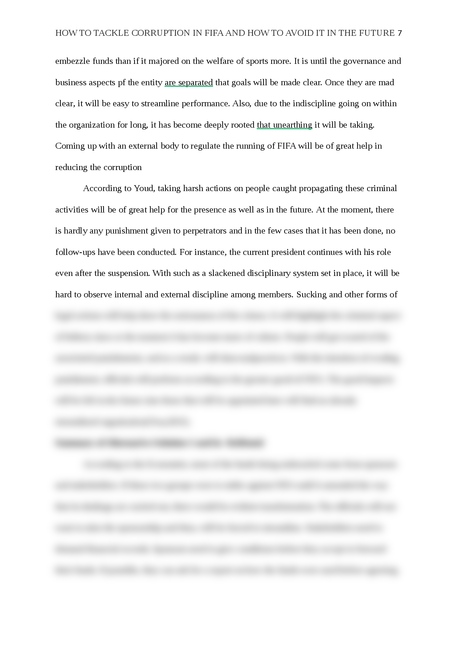 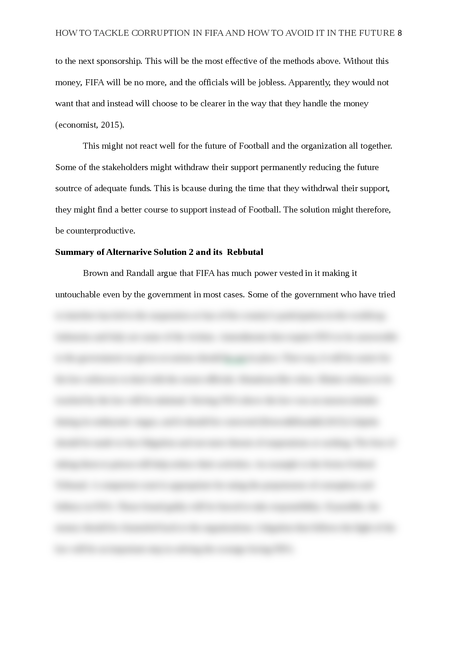 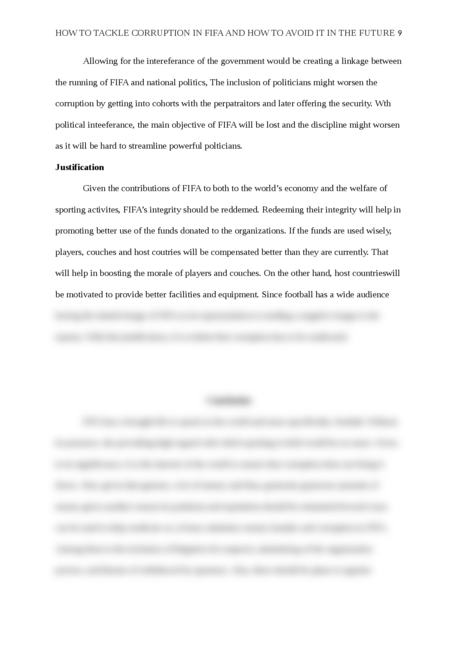 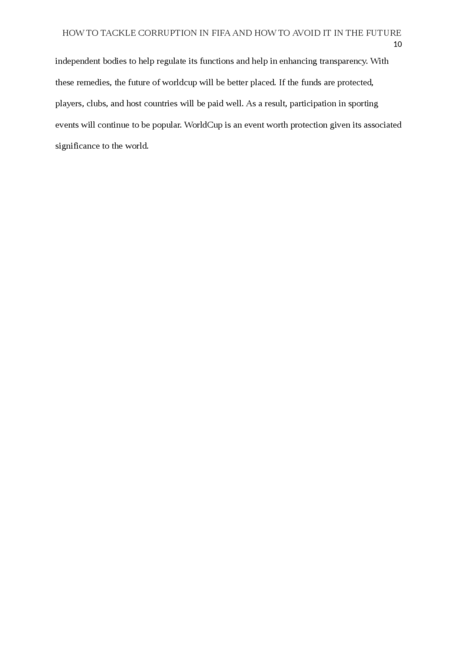 How can corruption be tackled and avoided in the future in FIFA?

Title: How Corruption Can Be Tackled And Avoided In The Future In Fifa
Length: 10 pages (2981 Words)
Style: APA

FIFA was founded back in 1904 where it only stood as a volunteer is sponsoring football activities. The main objective of its establishment was to supporting sporting activities, especially football. As an organisation, FIFA, collects funds from sponsors, sell of rights and tickets. The funds are supposed to be invested in the bettering of the game through extending attractive remuneration to players, couches, team doctors as well as host countries. However, the funds are misappropriated in most cases. In recent years, the organizations have faced challenges of corruption allegations. It is purported that most of its senior official are only interested in amassing wealth than in the promotion of Football. The corruption scandals have not only disadvantaged those who are supported to benefit from them but also, have tainted the image of FIFA. The corruption can be fought through punishing the errant officials, involving independent audit bodies and assesers.

I decided to base my research on the widespread corruption allegation facing FIFA and after that, suggest ways through which it can be tackled, and its reoccurrence in the future prevented. FIFA is a great governing body for football. Its mandate is to facilitate the happening of football activities across the globe.

According to the Economist, one major way through which corruption can be fought and reduced or eradicated all the same is through the reinstatement of Banks credibility. Banks are supposed to run occasion checks on some of their clients with the intention of ensuring that the sources of their monies are clean (economist, 2015). The term clean, in this case, means free from any criminal threshold. The World Bank, the American government, and other concerned bodies should put in place policies that ensure all banks conduct this checks and report suspicious cases. To assure this, a department need to be put in place and is to be delegated the role of punishing banks and the relevant officials that are found guilty of conspiracy or negligence. That way, banks and agents will be more efficient at executing their stipulated duties. Also, those that have been supporting the illegal activities through association or silence of criminal transactions will be... 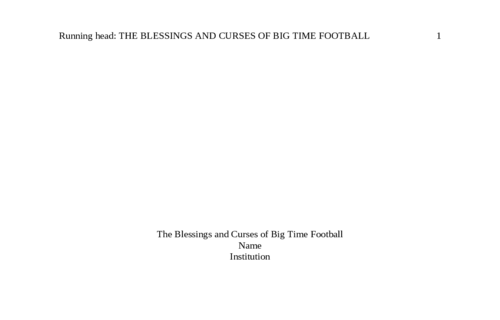 The Blessings and Curs... 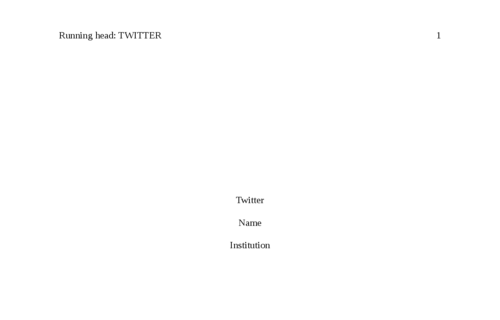 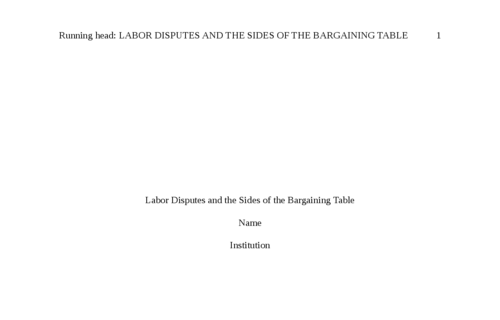 Labor Disputes and the...