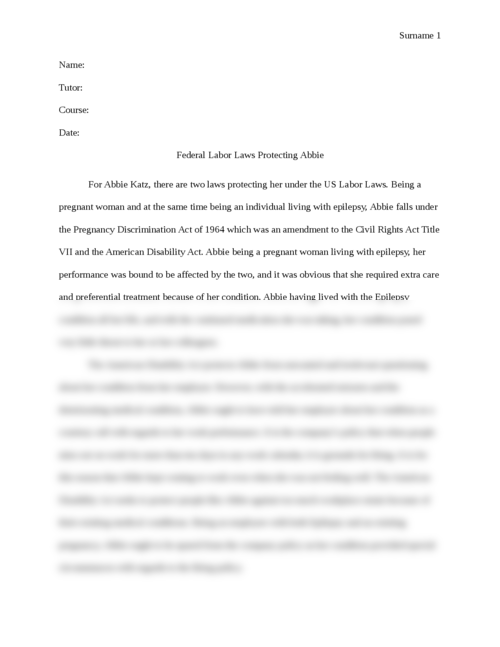 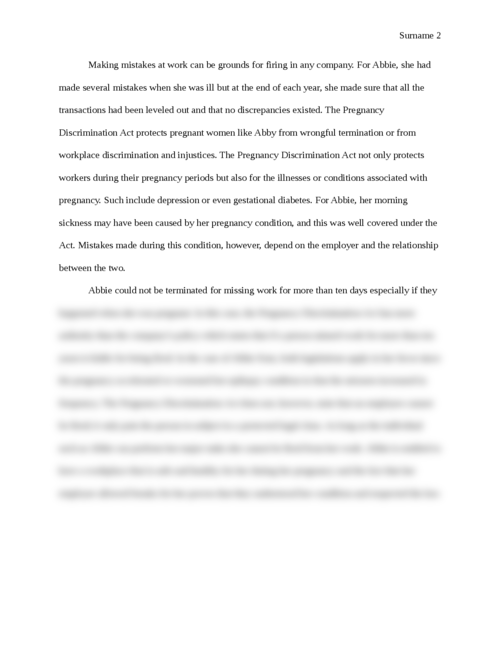 Abbie Katz is a 28-year old single woman who has a young child and a newborn due in seven months. She has worked her way through school while paying for college with both scholarships and her own money. She held various jobs throughout high school and into college. Abbie grew up in a nice suburban neighborhood with her parents and two siblings. During her teens, she was diagnosed with epilepsy. For years, it was uncontrollable, but when she was nineteen, with new medications her epilepsy has been controlled with her ongoing prescription drugs she is required to take for the rest of her life! She may have a seizure one to three times per year. Abbie received excellent grades and in college and someday plans on becoming a CPA, but with her young child just does not have the ability to work in an accounting firm and devote her time in her career and for studies.

During last year, Abbie has called off work twice, both times were due to seizures she had and it typically takes her 2-3 days to fully recuperate and regain her strength and overcome headaches she gets with the seizures. One time when she called off it happened to be during the first of the month when it is extremely busy within the finance department. Due to her illness, her manager had to complete a majority of her work that is due by the 10th of the month, leaving her manager extremely angry. The other time she called off it was due to a seizure however she returned to work the day after it occurred. She was not feeling up to par and noticed that she just could not concentrate that well. After doing some of her work, she ended up going home for the remainder of the day and was off for another two days.

A month later Abbie discovered that on the morning she came in last month while not feeling well  that she entered some wrong transactions which caused one of credit union’s largest business customers to get a delinquent notice. It was for a $100,000 payment that was posted incorrectly. The COO of the business came to the credit union and threatened to close the business accounts. Once again her manager was not happy with Abbie and gave her a disciplinary warning as a result of that error.

Six months after that, she posted a $500 payment to an incorrect business customer’s account.

During the year, she reconciled all the bank statements on a monthly basis error free!

Abbie is known for her compassion and well-mannered temper when dealing with customers and other staff. She is liked by most co-workers! Many of her co-workers are supportive to her when she takes some extra breaks throughout the day because they realize she is having a difficult pregnancy and is often times they do see her sick throughout the morning.

However, there is one employee, Tiffany, who is a black female and in the same job role as Abbie who is very upset because when she was pregnant six months ago there was little compassion from her co-workers. In addition, her manager put her off work because she had a doctor’s slip stating one of the restrictions Tiffany needed was a ten minute break for every two hours worked. According to her manager, there was just too much work during the day to allow all these breaks for a salaried employee.

Abbie realizes that performance evaluation time is coming in the next few months. Her employer uses a BARS appraisal tool and Abbie is very worried that she is going to mark low for attendance since she did miss a couple of days due to her epilepsy. This is why she comes to work even when sick during her pregnancy. There is a no fault attendance policy which states if you miss ten days in any one given rolling calendar year, this is cause for immediate termination.

Abbie currently makes $40,000 annually. Each year the company projects a 3-7% merit increase based on performance. Also, a salaried employee is allowed to earn a $500 bonus if there are no absences during that calendar year. This is given with the first pay of January of the preceding year. Salary increases based on performance evaluations are effective with the first pay of April each year. Managers do evaluations in early March.

For Abbie Katz, there are two laws protecting her under the US Labor Laws. Being a pregnant woman and at the same time being an individual living with epilepsy, Abbie falls under the Pregnancy Discrimination Act of 1964 which was an amendment to the Civil Rights Act Title VII and the American Disability Act. Abbie being a pregnant woman living with epilepsy, her performance was bound to be affected by the two, and it was obvious that she required extra care and preferential treatment because of her condition. Abbie having lived with the Epilepsy condition all her life, and with the continued medication she was taking, her condition posed very little threat to her or her colleagues.