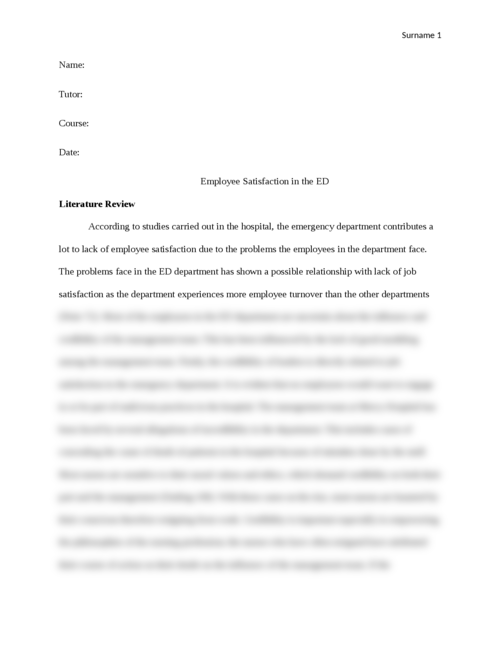 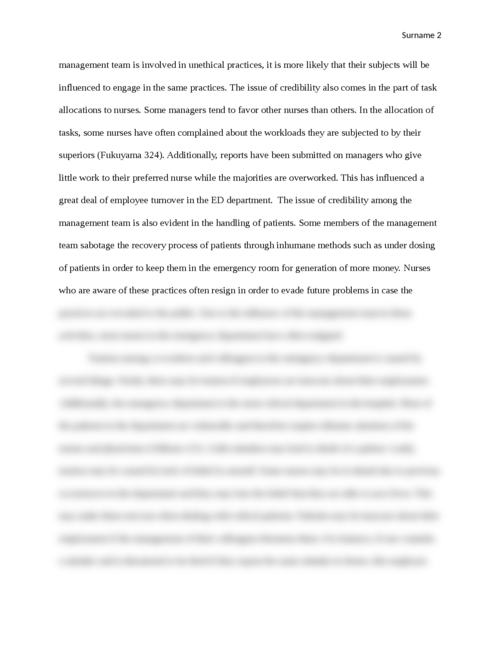 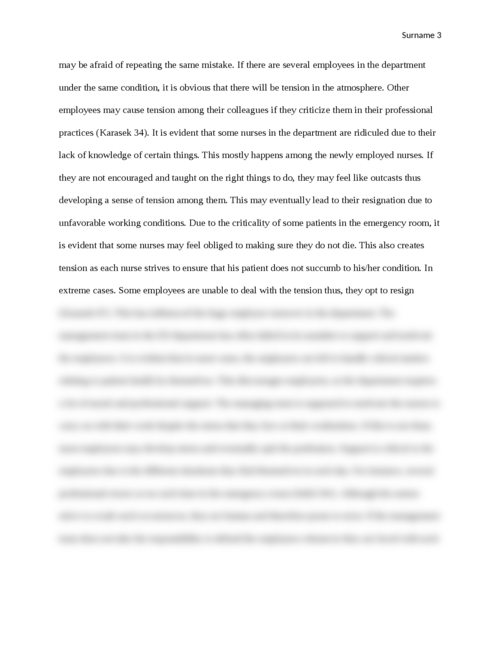 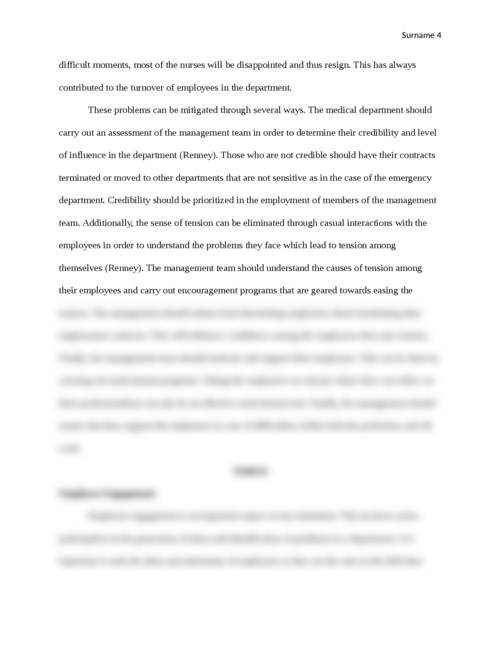 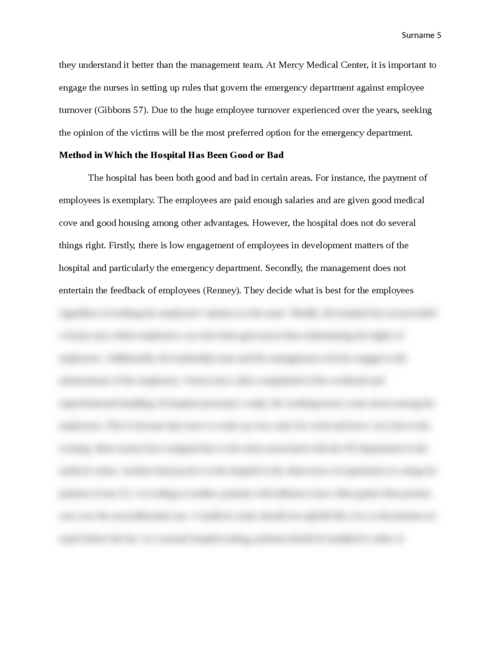 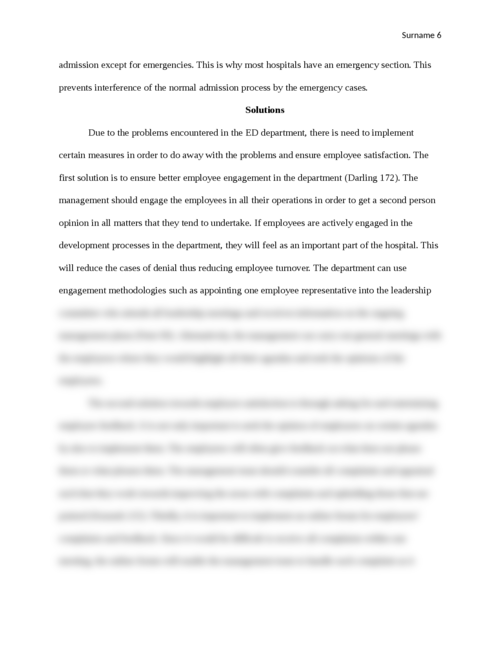 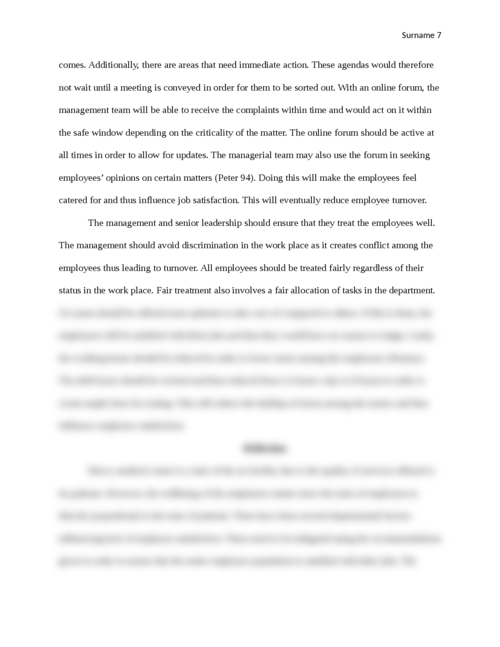 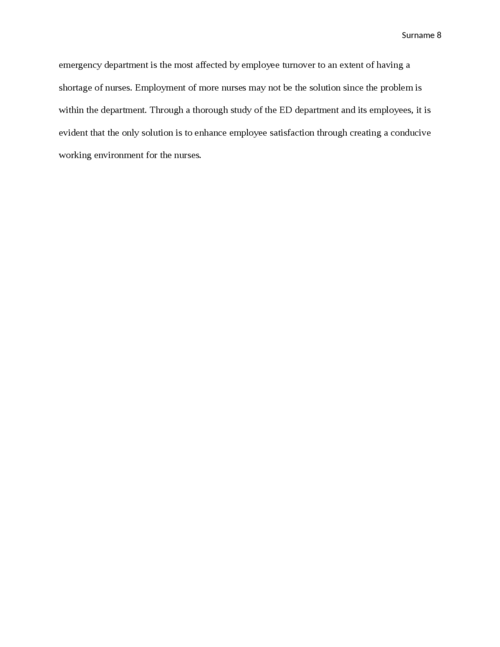 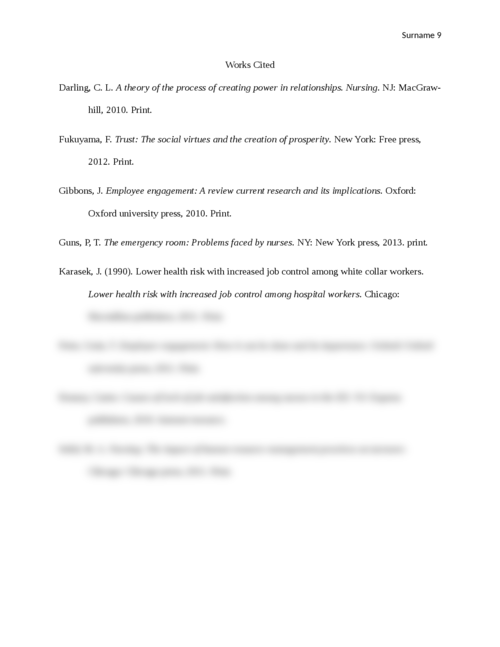 Employee Satisfaction In The Emergency Department

Think of yourself as an organizational consultant, and assume that a key manager has requested a thorough analysis and recommendations of the employee satisfaction in the emergency department as a course of action to resolve an actual organizational problem that will make a difference to the future performance of the organization.

Employee Satisfaction in the ED

According to studies carried out in the hospital, the emergency department contributes a lot to lack of employee satisfaction due to the problems the employees in the department face. The problems face in the ED department has shown a possible relationship with lack of job satisfaction as the department experiences more employee turnover than the other departments (Peter 72). Most of the employees in the ED department are uncertain about the influence and credibility of the management team. This has been influenced by the lack of good modeling among the management team. Firstly, the credibility of leaders is directly related to job satisfaction in the emergency department. It is evident that no employees would want to engage in or be part of malicious practices in the hospital. The management team at Mercy Hospital has been faced by several allegations of incredibility in the department. This includes cases of concealing the cause of death of patients in the hospital because of mistakes done by the staff. Most nurses are sensitive to their moral values and ethics, which demand credibility on both their part and the management (Darling 108). With these cases on the rise, most nurses are haunted by their conscious therefore resigning from work. Credibility is important especially in empowering the philosophies of the nursing profession; the nurses who have often resigned have attributed their course of action on their doubt on the influence of the management team. If the management team is involved in unethical practices, it is more likely that their subjects will be influenced to engage in the same practices. The issue of credibility also comes in the part of task allocations to nurses. Some managers tend to favor other nurses than others. In the allocation of tasks, some nurses have often complained about the workloads they are subjected to by their superiors (Fukuyama 324). Additionally, reports have been submitted on managers who give little work to their preferred nurse while the majorities are overworked. This has influenced a great deal of employee turnover in the ED department. The issue of credibility among the management team is also evident in the handling of patients. Some members of the management team sabotage the recovery process of patients through inhumane methods such as under dosing of patients in order to keep them in the emergency room for generation of more money. Nurses who are aware of these practices often resign in order to evade future problems in case the practices are revealed to the public. Due to the influence of the management team in these activities, most nurses in the emergency department have often resigned.