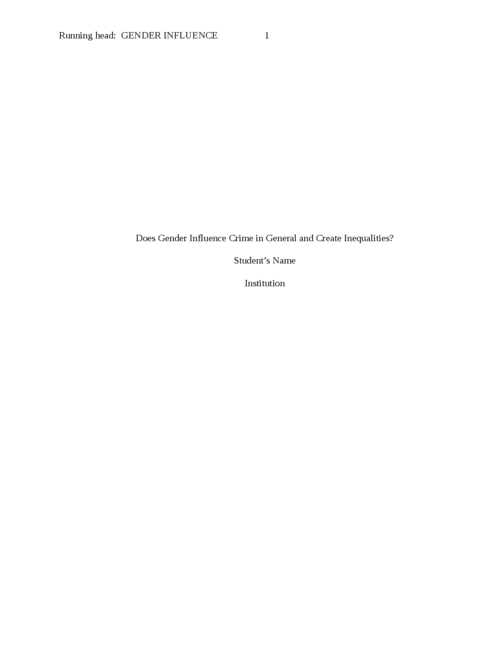 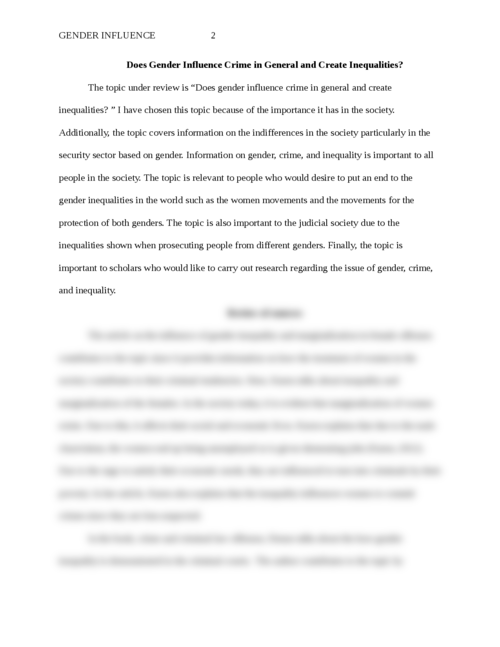 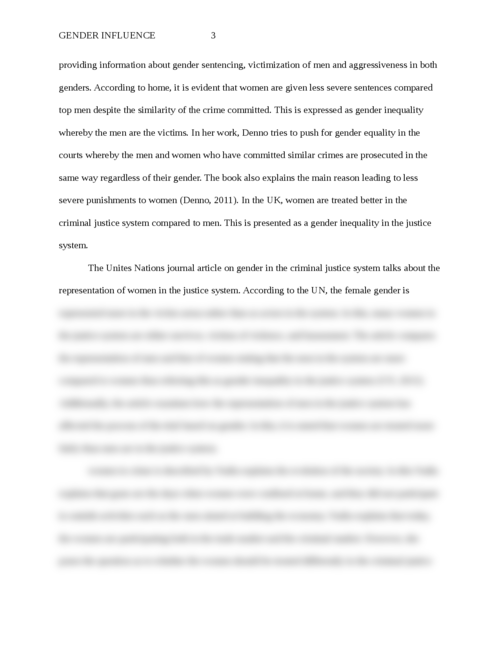 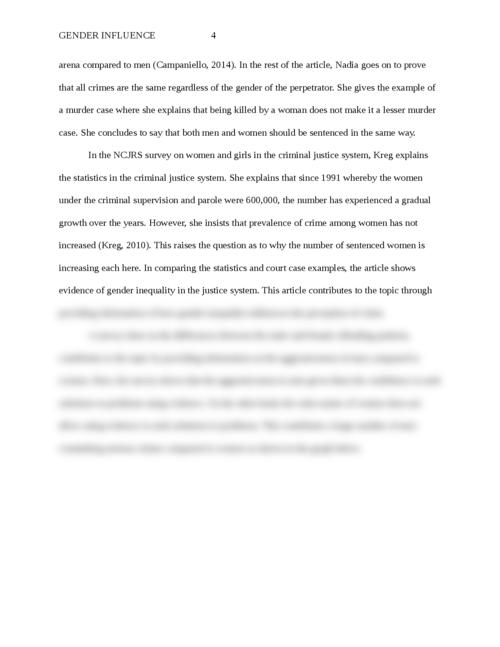 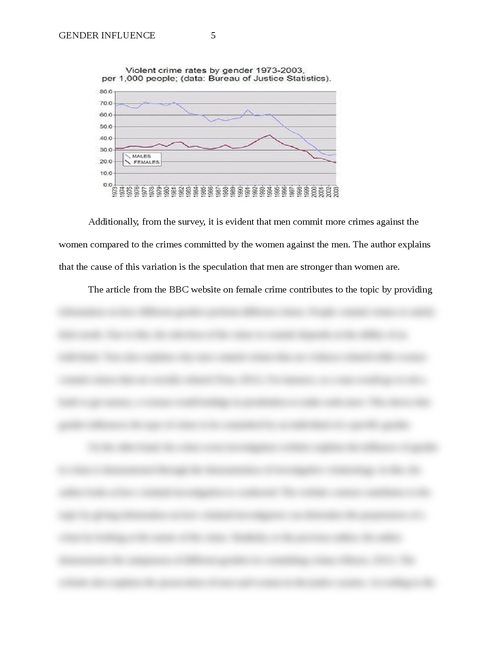 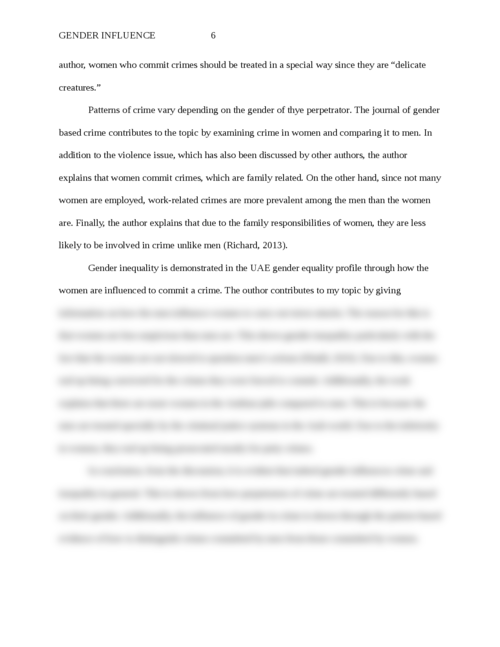 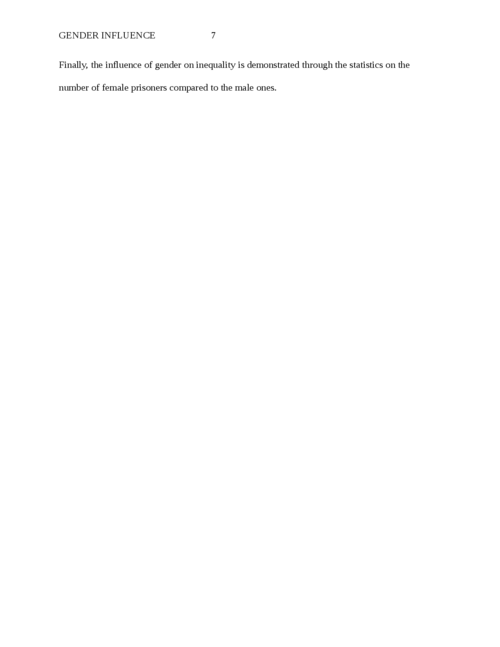 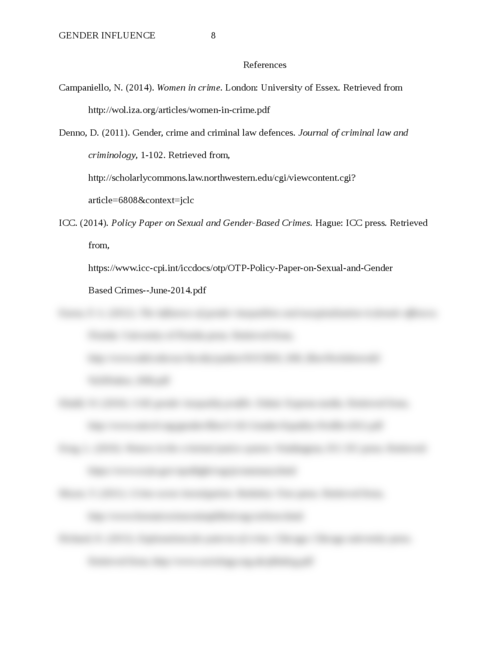 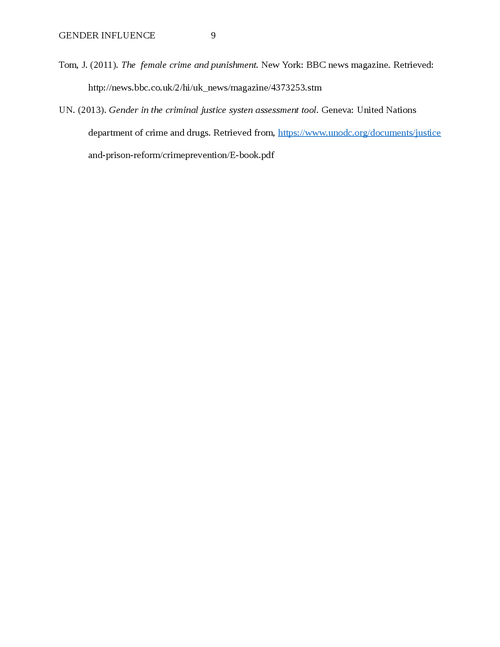 Does Gender Influence Crime In General And Create Inequalities?

Write a review of some existing sources of information relating to the topic "Does gender influence crime in general and create inequalities?"

Clearly identify the topic of gender and its influence in crime and offer an explanation as to why you have chosen this particular topic.

Offer a critical review of a range of different existing sources of information in relation to the topic (Academic articles, media (newspapers,tabloids,websites), surveys, statistics.

Produce and submit a written review of these sources.

Simply explore existing sources of information in relation to this topic "Does gender influence crime in general and create inequalities?" sources from media statistics and academic journals.

In the introduction to your assignment you need to specify the chosen topic of "gender and how it influences crime and creates inequalities". You also need to offer an explanation as to why you have chosen that particular topic. This might mean explaining why it is of relevance and to who, in what particular context it is relevant, situating it within a broader social, political, cultural, and economic context, and talking about how you arrived at that topic for instance.

The majority of your assignment should be devoted to offering a review of the sources you have identified, accessed, and evaluated in relation to your group topic. You should aim to clearly identify what each source contributes to an understanding of the topic, but also demonstrate that you have approached and evaluated each source in an appropriately critical and analytical way.

Does Gender Influence Crime in General and Create Inequalities?

The topic under review is “Does gender influence crime in general and create inequalities? ” I have chosen this topic because of the importance it has in the society. Additionally, the topic covers information on the indifferences in the society particularly in the security sector based on gender. Information on gender, crime, and inequality is important to all people in the society. The topic is relevant to people who would desire to put an end to the gender inequalities in the world such as the women movements and the movements for the protection of both genders. The topic is also important to the judicial society due to the inequalities shown when prosecuting people from different genders. Finally, the topic is important to scholars who would like to carry out research regarding the issue of gender, crime, and inequality.

The article on the influence of gender inequality and marginalization in female offenses contributes to the topic since it provides information on how the treatment of women in the society contributes to their criminal tendencies. Here, Karen talks about inequality and marginalization of the females. In the society today, it is evident that marginalization of women exists. Due to this, it affects their social and economic lives. Karen explains that due to the male chauvinism, the women end up being unemployed or is given demeaning jobs (Karen, 2012). Due to the urge to satisfy their economic needs, they are influenced to turn into criminals by their poverty. In her article, Karen also explains that the inequality influences women to commit crimes since they are less suspected.