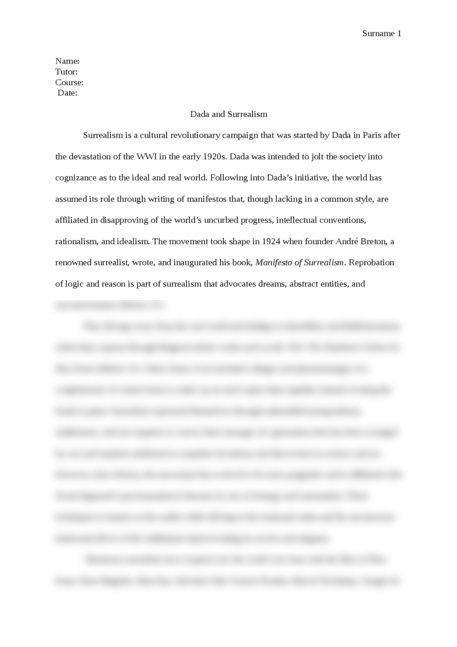 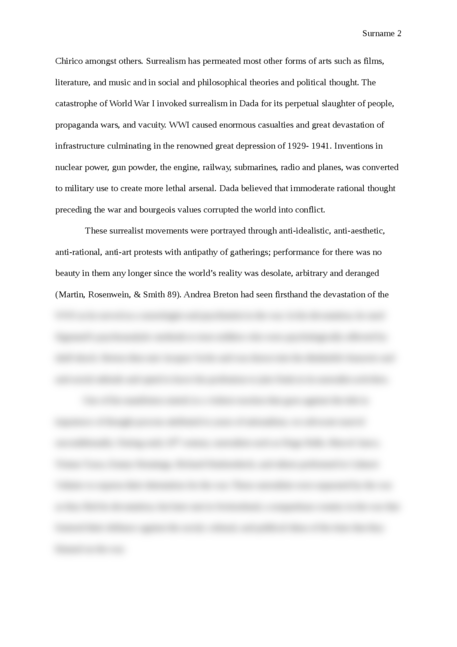 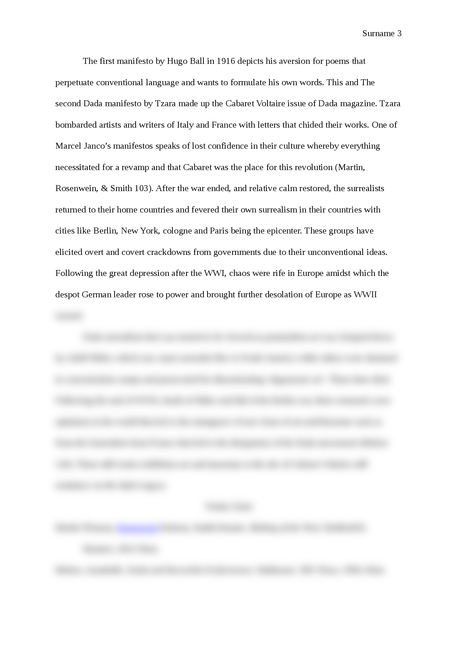 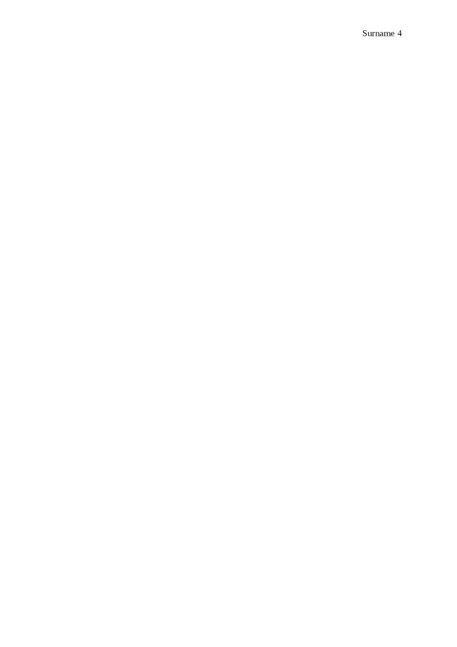 Based on The Future of an Illusion and Civilization and Its Discontents, explain how, in Freud’s view, civilization limits people’s freedom, restricting, for instance, primitive urges like the desires for sex and violence, as a necessary condition of keeping order within a society.

Read the Dada Manifesto and the google artwork by Marcel Duchamp, René Magritte, Salvador Dalí, Francis Picabia, and Giorgio de Chirico, among other Dada and surrealist artists. Explain how Dada and surrealism reflect the feelings of a culture gone mad after the devastation of WWI. If the ages of science and reason and industry led to the mayhem and suffering of that war, these artists asked, why should anyone have faith in logic, reason, or the beauty of art when life seems so arbitrary, desolate, and deranged? Notice how these artists prefer to explore the world of dreams and the unconscious than the surface world of objective, ordinary life.

Your response should be at least 750 words in length. Use MLA format for any quotations or citations that you use to support your answer

The Making of the West Chapter 26: The Great Depression and World War II

Just as Europe was digging out from the rubble of World War I, economic disaster struck. Germany was the hardest hit, due mostly to the tough sanctions hoisted upon them by the rest of the Europe. During these most desperate times, a despot, Adolph Hitler, rose to power. Read about how economic depression and totalitarianism lead to the Second World War

The Norton Anthology, Vol. 2 Sigmund Freud, The Future of an Illusion

"Religion is comparable to a childhood neurosis." – Sigmund Freud, The Future of an Illusion, 1927. Deeply grieved by the loss of his daughter after World War I, Freud attempts to replace religious faith with reason

Sigmund Freud, Civilization and Its Discontents

Civilization and its Discontents, written in 1929, is considered to be Freud’s most influential work. Freud describes the fundamental frictions between the individual and society

Tristian Tzara was Romanian born poet and writer. He is credited for starting the Dadaist movement

Surrealism is a cultural revolutionary campaign that was started by Dada in Paris after the devastation of the WWI in the early 1920s. Dada was intended to jolt the society into cognizance as to the ideal and real world. Following into Dada’s initiative, the world has assumed its role through writing of manifestos that, though lacking in a common style, are affiliated in disapproving of the world’s uncurbed progress, intellectual conventions, rationalism, and idealism. The movement took shape in 1924 when founder André Breton, a renowned surrealist, wrote, and inaugurated his book, Manifesto of Surrealism. Reprobation of logic and reason is part of surrealism that advocates dreams, abstract entities, and unconsciousness (Melzer 37).