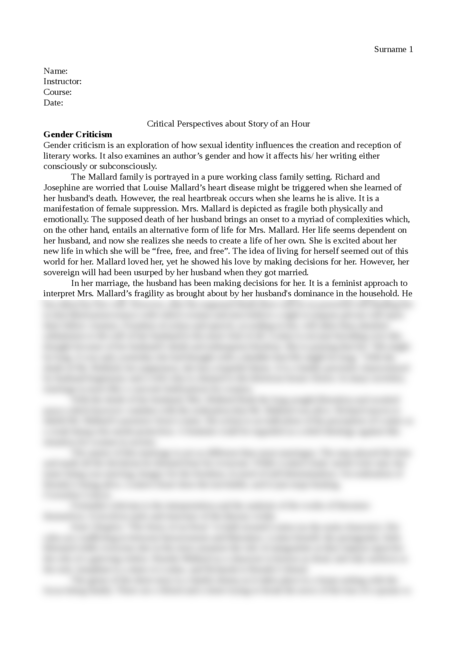 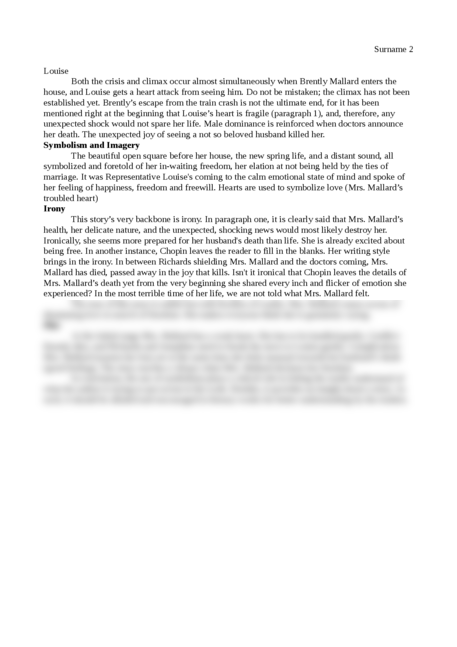 Critical Perspectives About Story Of An Hour

Pick one story we have read this semester. Then, present * your own* analysis via two distinct (meaning no over-lapping) critical approaches.

For example, you may choose “Story of an Hour” and then present one perspective focusing on Gender Studies and then another as Formalistic (maybe a focus on the irony of the spring imagery).

You should include the heading as specified on the syllabus.

The title should be the story you chose.

You should begin each with your critical approach in bold, followed by a simple definition of that particular approach. You should then begin your analysis.

Each analysis should be a page or so SINGLE SPACED

You MAY use research to support your particular approach if necessary. For example, if you would like to connect some aspect of Barn Burning with William Faulkner’s childhood, you would need to provide an appropriate source along with proper in text citations.

Critical Perspectives about Story of an Hour

Gender criticism is an exploration of how sexual identity influences the creation and reception of literary works. It also examines an author’s gender and how it affects his/ her writing either consciously or subconsciously.

The Mallard family is portrayed in a pure working class family setting. Richard and Josephine are worried that Louise Mallard’s heart disease might be triggered when she learned of her husband's death. However, the real heartbreak occurs when she learns he is alive. It is a manifestation of female suppression. Mrs. Mallard is depicted as fragile both physically and emotionally. The supposed death of her husband brings an onset to a myriad of complexities which, on the other hand, entails an alternative form of life for Mrs. Mallard. Her life seems dependent on her husband, and now she realizes she needs to create a life of her own. She is excited about her new life in which she will be “free, free, and free”. The idea of living for herself seemed out of this world for her. Mallard loved her, yet he showed his love by making decisions for her. However, her sovereign will had been usurped by her husband when they got married.

In her marriage, the husband has been making decisions for her. It is a feminist approach to interpret Mrs. Mallard’s fragility as brought about by her husband's dominance in the household. He has taken her free will. However, after his supposed death there will be no powerful will binding her in that blind perseverance with which women and men believe a right to impose private will upon their fellow creature.