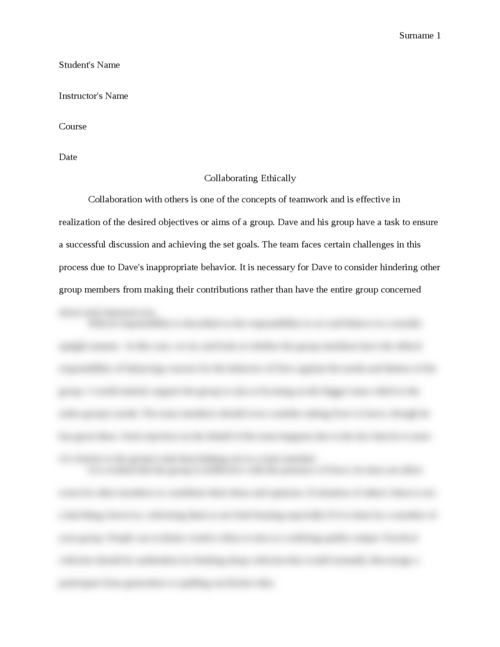 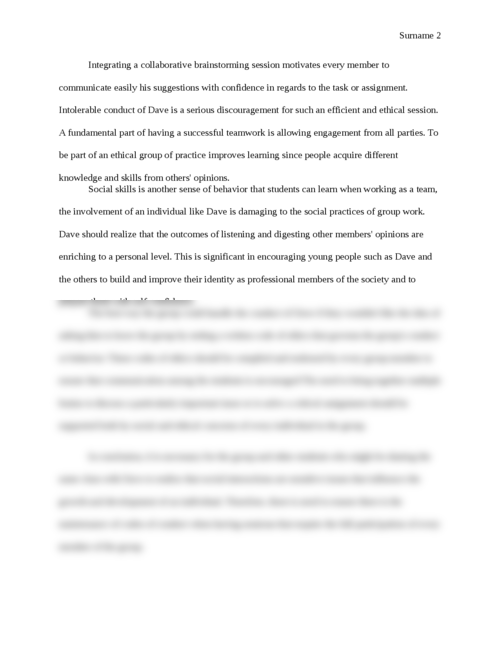 What would you do?

Dave has great ideas and likes to take the lead during group discussion.During traditional brainstorming sessions, he often suggests more than anyone else.But he also just can't seem to avoid evaluating and criticizing other people's ideas.David's presence in a group sometimes intimidates others,so they don't contribute. Group members have asked Dave to resist evaluating other people's suggestion, but he just can't seem to stop doing it.

Should the group ask Dave to leave? He makes a considerable contribution to the group but also limits the contribution of others.Do group members have an ethical responsibility to balance concern for an individual member of the group against the needs of the entire group?

Collaboration with others is one of the concepts of teamwork and is effective in realization of the desired objectives or aims of a group. Dave and his group have a task to ensure a successful discussion and achieving the set goals. The team faces certain challenges in this process due to Dave's inappropriate behavior. It is necessary for Dave to consider hindering other group members from making their contributions rather than have the entire group concerned about such immoral acts.

Ethical responsibility is described as the responsibility to act and behave in a morally upright manner. In this case, we try and look at whether the group members have the ethical responsibility of balancing concern for the behavior of Dave against the needs and desires of the group. I would entirely support the group to aim at focusing on the bigger issue which is the entire group's needs. The team members should even consider asking Dave to leave, though he has great ideas. Such rejection on the behalf of the team happens due to the fact that he is more of a barrier to the group's task than helping out as a team member.