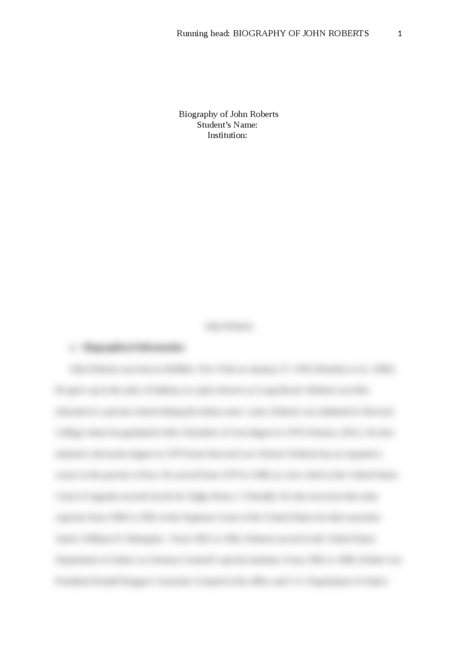 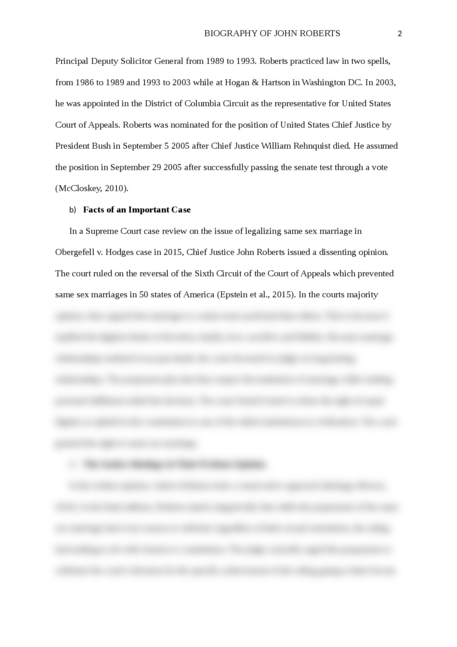 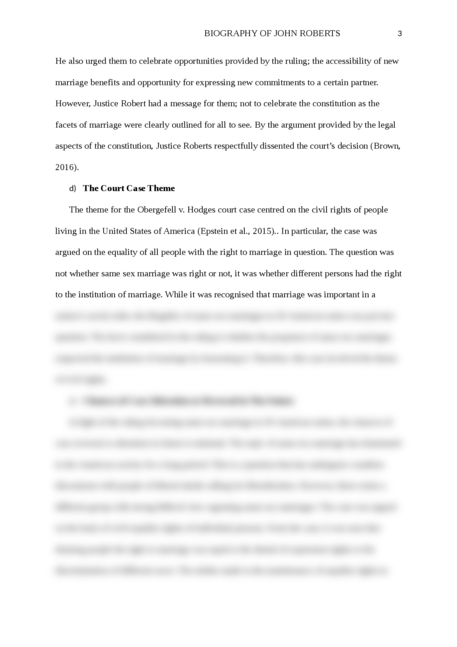 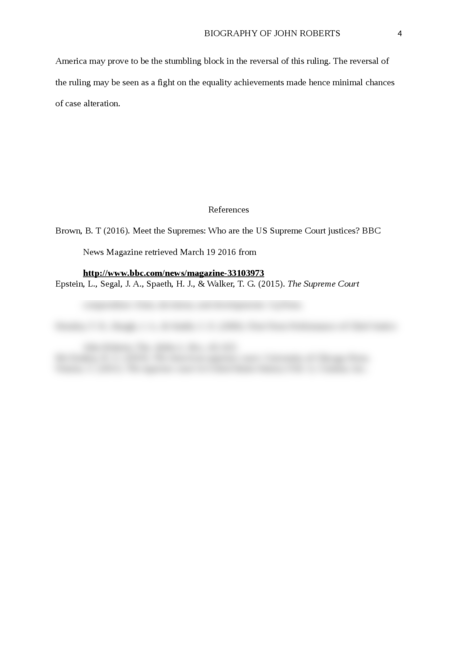 Please select a member of the U.S. Supreme Court (past or present) & address the following objectives.

John Roberts was born in Buffalo, New York on January 27, 1955 (Hensley et al., 2006). He grew up in the state of Indiana at a place known as Long Beach. Roberts was first educated at a private school during his infant years. Later, Roberts was admitted to Harvard College where he graduated with a Bachelor of Arts degree in 1976 (Warren, 2011). He also attained a doctorate degree in 1979 from Harvard Law School. Roberts has an expansive career in the practice of law. He served from 1979 to 1980 as a law clerk in the United States Court of Appeals second circuit for Judge Henry J. Friendly. He also served in the same capacity from 1980 to 1981 in the Supreme Court of the United States for then associate Justice William H. Rehnquist.  From 1981 to 1982, Roberts served in the United States Department of Justice as Attorney General’s special assistant. From 1982 to 1986, Robert was President Ronald Reagan’s Associate Counsel in his office and U.S. Department of Justice Principal Deputy Solicitor General from 1989 to 1993. Roberts practiced law in two spells, from 1986 to 1989 and 1993 to 2003 while at Hogan & Hartson in Washington DC. In 2003, he was appointed in the District of Columbia Circuit as the representative for United States Court of Appeals. Roberts was nominated for the position of United States Chief Justice by President Bush in September 5 2005 after Chief Justice William Rehnquist died. He assumed the position in September 29 2005 after successfully passing the senate test through a vote (McCloskey, 2010).

Facts of an Important Case

In a Supreme Court case review on the issue of legalizing same sex marriage in Obergefell v. Hodges case in 2015, Chief Justice John Roberts issued a dissenting opinion. The court ruled on the reversal of the Sixth Circuit of the Court of Appeals which prevented same sex marriages in 50 states of America (Epstein et al., 2015). In the courts majority opinion, they argued that marriage is a union more profound than others. This is because it typified the highest ideals of devotion, family, love, sacrifice and fidelity. Because marriage relationships endured even past death, the court favoured to judge on long lasting relationships. The proponent plea that they respect the institution of marriage while seeking personal fulfilment aided the decision. The court found it hard to refuse the right of equal dignity as upheld in the constitution in one of the oldest institutions in civilization. The court granted the right to same sex marriage.