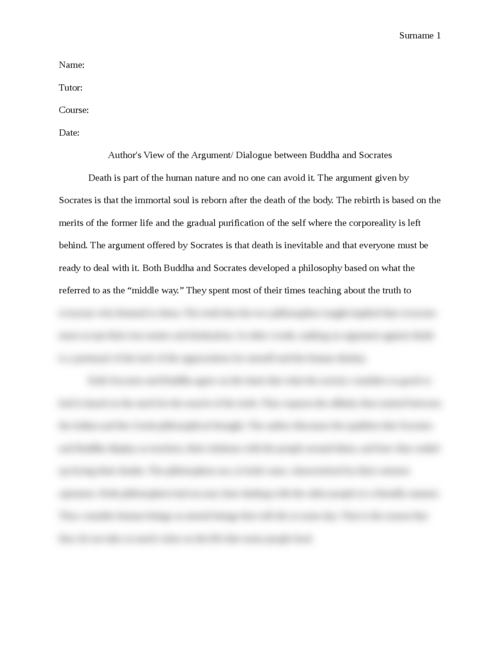 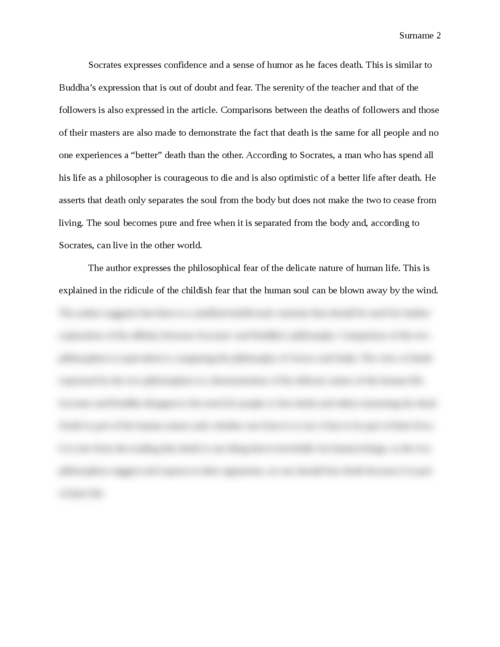 Author's View Of The Argument/ Dialogue Between Buddha And Socrates

After identifying what the scholar is arguing and how the argument is constructed, you will write a summary, in prose, of the argument in your own words.

State the main ideas and key points of the argument simply, objectively, and accurately in your own words in order to demonstrate that you understand the problem and question the author raises and the argument s/he makes to address the problem or answer the question. Do not judge or evaluate the scholar’s argument, just explain it and all of its relevant components: the problem, question, thesis, and main claims and evidence used to support the thesis. Pay attention to counter- arguments/evidence, how the author addresses the evidence supporting these alternative hypotheses, and how the author discusses the significance of the thesis and implications of it.

Death is part of the human nature and no one can avoid it. The argument given by Socrates is that the immortal soul is reborn after the death of the body. The rebirth is based on the merits of the former life and the gradual purification of the self where the corporeality is left behind. The argument offered by Socrates is that death is inevitable and that everyone must be ready to deal with it. Both Buddha and Socrates developed a philosophy based on what the referred to as the “middle way.” They spent most of their times teaching about the truth to everyone who listened to them. The truth that the two philosophers taught implied that everyone must accept their true nature and destination. In other words, making an argument against death is a portrayal of the lack of the appreciation for oneself and the human destiny.