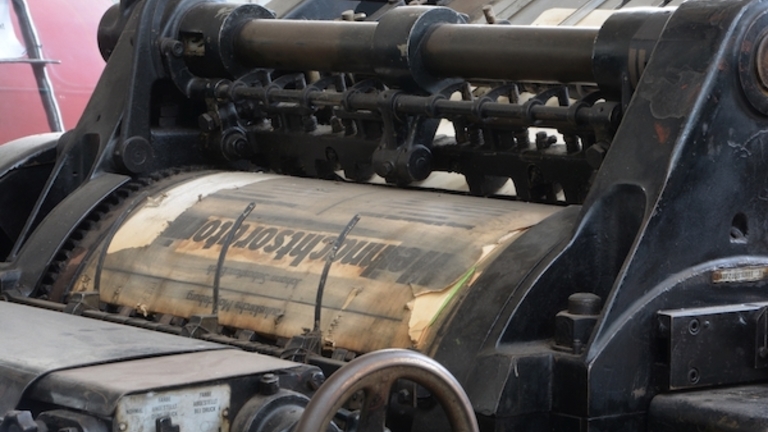 What Happened to .com?

By the end of 2018, visits to the once-popular website .com returned a simple 404 “Page Not Found” error.  But at one time, this high-traffic site was central to a small group of hobbyists that collected newspapers.  (One article in 2008, for example, put traffic at 500,000 per month.)

While new websites appear (and old sites disappear) every day, is interesting for reasons:

Why did it disappear?

What distinguished the website was its fascination with history as told through first edition newspapers.  , the site’s founder, bought an original copy of the Philadelphia Inquirer in 1965 that related the capture and death of John Wilkes Booth after his assassination of US President Abraham Lincoln 100 years earlier.  In a 2008 interview Brown said that this first newspaper taught him that “History is never more fascinating than when it’s read from the day it was first reported”.

In 1969, as he was purchasing and collecting as many old newspapers as he could find, Brown realized that he was running out of archival space. His next step? He became a collectible newspaper dealer, buying and selling newspapers through the mail.

In 1984 he founded the Newspaper Collectors Society of and launched a magazine called “Collectible Newspapers”.  He published the magazine for thirteen years, until . (source)

As Brown was winding down Collectible Newspapers, he discovered the internet, and in October 1995, he launched .com.

The site described itself as a “non-profit organization devoted to providing FREE primary source material for students, teachers, and history buffs. This site focuses primarily on HOW news of major, and not so major, in newspapers of the time. In addition, there is information about the technology used to produce newspapers over the past 400 years.”

.com the non-profit status in 2003. Along with donations, Rick made money from advertisements both those that to newspaper collectors, and more general ads that targeted term paper and other academic essay writing services.

Much of what we know about the transition of from to its second owner comes from Archiveorg.  If you aren’t familiar with Archive the site sends bots out to visit websites, and then stores snapshots of the sites.

Finally, on Oct 18, 2015 a new snapshot of HistoryBuff appeared with a new tagline “HistoryBuff.com: The Future of History” and more mainstream historical articles, such

One David Segura lists himself as the “Founder” of HistoryBuff.com on LinkedIn.  He provides the following summary of the site: “HistoryBuff is a startup media company that can best as "BuzzFeed meets Smithsonian." We're demystifying history by telling stories in a relatable voice that's sometimes provocative, sometimes hilarious, and always fascinating. By leveraging our diverse team of journalists, videographers, and community contributors from around the country, we are well on our way to becoming this generation's History Channel.

RELATED: Help with my homework

What Happened to .com and why is it no Longer Available?

There are two mysteries for :

What follows is nothing more than informed speculation.  In Dec 2018 we reached out to Tim Hughes, the newspaper collector who interviewed in 2008, to ask if he had any idea what happened.  He wrote:

"Rick and I were in touch several times a year over the past 40 years. About 2 years ago we had one of our catalogs to him returned marked deceased". I called and got no answer. No one else knows what happened to him. I checked on-line and found nothing."

One potential explanation is that died, and when he did not pay the registration fee for the .com domain name, for anyone to buy.

Perhaps a more likely (though still speculative) explanation is that David Segura bought HistoryBuff.com from before he died, and one or both of them worked together to migrate the old HistoryBuff.com content to org

We have had no luck in determining why Segura stopped publishing .com.  We reached out to Kukaj, a writer for the site.  He said: “I remember writing an article, sending it to them for publishing and next thing I know, the site just no longer existed.”

Information about your order is will never be shared with any third parties. You can trust us!

Quality of our services and 100% satisfaction of our clients are ensured by our money back policy. Your satifaction is our aim.

Every paper delivered by our writers is unique, plagiarism free and absolutely authentic. It is written from scratch to meet your requirements and academic needs.